Just a few days after being hit by Typhoon Lionrock, and two weeks after Typhoon Mindulle, Japan is preparing for the arrival of another major storm system.

Typhoon Namtheun is approaching Kyushu from the south. It is forecast to pass just to the west of the southern tip of Kyushu, before curving northeastwards, taking it across the western side of the island.

Namtheun has already struck the northern Ryuku Islands, although there are no reports of casualties or damage from there yet.

At 00:00 GMT on Saturday, Namtheun was generating winds of 165km/h, the equivalent of a Category 2 hurricane, on the five-point Saffir-Simpson scale.

It is expected to weaken as it moves northwards over cooler waters, but wind gusts close to 200km/h are likely around Kagoshima prefecture in the far south.

Landfall is expected at around 13:00 GMT on Sunday, very close to Nagasaki, a city with a population of almost half a million. In total, almost 3.5 million people could be affected by winds of at least 120km/h.

Rainfall totals in excess of at least 200mm are likely across the island. Kyushu is a mountainous, volcanic island. The highest peak is Mount Nakadake at 1,592 metres. Rainfall totals could be almost double in these areas, particularly as Namtheun’s northward progress is expected to slow.

A storm surge of 0.9 metres has been predicted by the European Commission Joint Research Centre, although this figure probably cannot be relied upon, not least because of the typhoon’s line of approach and the fragmented, highly irregular nature of the coastline in this part of Japan.

The north of Kyushu has been identified in the past as containing at least four sites which are vulnerable to landslides. That will continue to be a concern well into Monday as the typhoon drifts into the Korea Strait.

At that stage it will still be close enough to western Honshu and Shikoku to cause flooding concerns here, too. 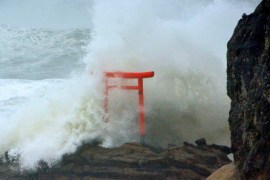 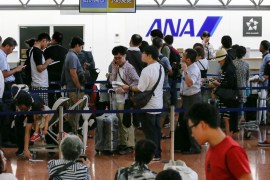 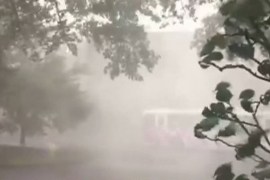