Afghan President Ashraf Ghani has formalised a peace treaty with Hezb-i-Islami, an armed group led by Gulbuddin Hekmatyar, a deal the government hopes will lead to more agreements with other fighters.

Hekmatyar also signed the agreement on Thursday via a video link into Kabul’s presidential palace. The ceremony was broadcast live on television.

It is the first peace treaty the Afghan government has completed since the war with the Taliban began in 2001.

The accord with the largely dormant Hezb-i-Islami has been welcomed by the international community as a possible template for any future peace deal with the Taliban, who have been fighting to overthrow the Kabul government for 15 years.

“Pakistan has consistently emphasised that there is no military solution of the conflict in Afghanistan. Politically negotiated settlement through an Afghan-owned and Afghan-led peace process is the most viable option for bringing lasting peace and stability to Afghanistan,” the statement said.

It also said the deal was encouraging and wished achievement of durable peace to Afghanistan.

The president of Afghanistan said earlier: “This is a chance for the Taliban and other militant groups to show what their decision is: to be with people and join the respected caravan of peace, like Hezb-i-Islami, or confront the people and continue the bloodshed.”

Ghani also pledged to lobby the US and the UN for the lifting of international sanctions on Hekmatyar, who was designated a “global terrorist” by the Washington for his suspected ties to al-Qaeda and the Taliban.

Once international sanctions are lifted, Hekmatyar is expected to return to Afghanistan after 20 years in exile. He is believed to be in Pakistan.

The head of his delegation in Kabul, Amin Karim, told The Associated Press on Wednesday that he believes the sanctions could be lifted within weeks.

Human Right Watch, the New York-based watchdog, last week branded Hekmatyar “one of Afghanistan’s most notorious war crimes suspects” and said his return would “compound a culture of impunity” that has denied justice to the many victims of warlords’ forces.

The 25-point peace agreement gives Hekmatyar and his followers immunity for past actions, and grants them full political rights.

In a speech greeted with chants of “Long Live Hekmatyar” from his supporters, who had gathered in the presidential palace, he called on the Afghan government to start peace talks with the Taliban.

“I call on all sides to support this peace deal and I call on the opposition parties of the government to join the peace process and pursue their goals through peaceful means,” Hekmatyar said in his message.

“We hope that the day comes when foreign interference has ended, foreign troops have departed fully from Afghanistan, and peace has been achieved.”

Alexey Yusupov, Afghanistan director at the Friedrich-Ebert-Stiftung Foundation, a German think-tank, said the deal was highly symbolical but it was unlikely to result in a peace agreement with the Taliban,

“Although you could say Hezb-i-Islami is the second largest insurgent group, their importance for what is going on in the Afghan battlefield this year is fairly non-existent,” he told Al Jazeera.

“The peace deal, although … showing that there is something that the Afghan society and Afghan political actors can actually achieve without foreign mediation and intervention – and this is something very important – that doesn’t mean that we will see a decline in violence, and it doesn’t necessarily mean that a real peace process with the Taliban will happen any time soon.”

The Taliban did not immediately comment on the agreement. 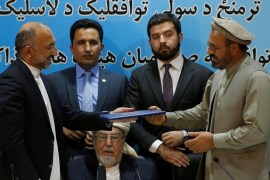 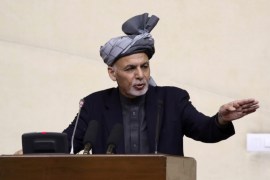 Kabul says it does not intend to take part in peace process aimed at bringing the Taliban to the negotiating table.