Switzerland’s lower house of parliament narrowly backed a ban on face veils on Tuesday, echoing moves by neighbouring France and other European nations.

The plan by right-wing politician Walter Wobmann – who led a successful campaign to outlaw new minarets in 2009 – still has to pass through the upper house and the government before it becomes law.

But it joins a list of measures championed by populist and right-wing movements that have polarised the Alpine nation, and drawn some criticism from abroad, including most recently a referendum ordering curbs on immigration from the EU.

Wobmann, from the anti-immigration Swiss People’s Party, has said the veil ban will preserve Swiss culture and curb radicalism. He is also pushing for a referendum on the issue.

His party, the most powerful in Swiss parliament after winning about 30 percent of seats in a 2015 election, pushed the measure through with help from lawmakers from the center-right.

It may have a tougher time passing the upper house, where parties that opposed the ban, including the Social Democrats, have a stronger presence.

A poll in August found 71 percent of Swiss favour a nationwide veil ban along the lines of one that went into effect in the Italian-speaking canton of Ticino this year, covering locals and visitors alike.

About 5 percent of Swiss residents are Muslim and few wear the face-covering clothing.

The proposal by lawmaker Wobmann won 88 votes with 87 against.

The ATS news agency quoted Wobmann as saying the goal of the national face veil ban was to “maintain public order and respect for the dignity of women”.

Tuesday’s vote may prove to be a largely symbolic move in the protracted process towards an outright ban on the full-face veil.

Lawmakers will almost certainly defer action on the issue until the country weighs in through a referendum, ATS said.

An initiative has been launched to collect the 100,000 signatures needed to hold a public vote on a ban.

The wealthy Alpine nation has seen a number of high-profile disputes involving its Muslim minority, including fines slapped on parents who refused to allow their daughters to take part in swimming lessons, and a case where male students refused to shake the hands of their female teachers. 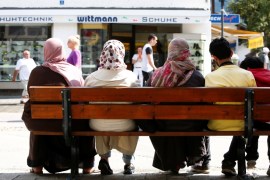 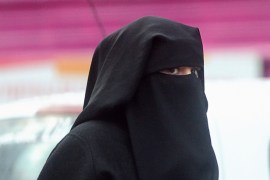