President Rodrigo Duterte has made a case for the restoration of the death penalty in the Philippines, saying the law had previously lost its effectiveness because it was not fully implemented.

Duterte told reporters on Monday that past presidents had succumbed to the pressure of the Catholic church and other “bleeding hearts” who argued against capital punishment “because only God can kill”.

“The problem with that is, I ask you, ‘What if there is no God?’” Duterte said at the presidential palace in the capital, Manila.

“When a one-year-old, an 18-month-old baby is taken from the mother’s arms, brought under a Jeep and raped, and killed, where is God,” he asked.

“People in the Philippines no longer believe in the laws, because the fear is not there,” Duterte said in a mix of Filipino and English.

“That is why I said, give me back the death penalty.”

While professing that he personally believes in God, the Philippine leader said, the existence of a higher being is a “perpetual question” for him, when he sees “heartaches, sorrows and agony” around him.

Since he took office in June end, more than 3,500 people have been killed as part of Duterte’s war on drug traffickers and users.

And he has not taken kindly to the global condemnation of the spiralling death toll. Last week the Philippine president lambasted European Union after it called for “strict monitoring of human rights abuses” in the country.

Earlier this month, Duterte directed profanities at UN Secretary-General Ban Ki-moon and US President Barack Obama, after they made similar comments about the mounting death toll in the the Asia Pacific nation.

On Friday, in a speech to police officers, Duterte made a similar comment while talking about illegal drugs in the country, and the rules of engagement in dealing with suspected drug criminals.

“Maybe God doesn’t want all these killings. But never mind, God is not my enemy. I’ll talk to him when I get there,” he said, drawing laughter from the officers.

“I’ll ask him, ‘If you are really God, you didn’t do anything, and the Filipinos are going crazy'” with illegal drugs “by the millions”, he said.

During the campaign, Duterte had promised to re-impose the death penalty as part of his policy to deal with illegal drugs in the country.

On Monday, he said he has “always been a hardliner when it comes to the penal laws”. 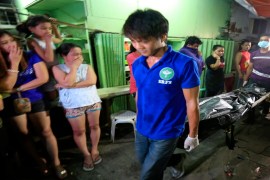