An official from the Palestine Liberation Organization (PLO) on Tuesday called on football’s ruling body FIFA to ban Israeli teams from playing matches in Jewish-only settlements across the occupied West Bank.

“By allowing games to be held on Palestinian land where settlements have been built, FIFA is involved in political and business activity that supports these settlements, which are considered illegitimate and illegal by international law,” Ali Ishaq, a member of the PLO’s committee in charge of the sports department, said in a statement.

The call comes two days after New York-based Human Rights Watch urged FIFA to act on the issue of six clubs who play in Israeli settlements in the occupied West Bank.

“By holding games on stolen land, FIFA is tarnishing the beautiful game of football,” said Sari Bashi, the director of HRW for Israeli and the Palestinian territories.

To comply with international law, she said, the clubs “need to move their games inside Israel”.

Israel has militarily occupied the West Bank since it seized the territory in the 1967 war.

Palestinians have long opposed the participation in the Israeli championships of the settlement clubs, which play in Israel’s third, fourth and fifth divisions.

FIFA is expected to discuss the issue at an October 13-14 meeting of its executive committee.

“FIFA will continue its efforts to promote friendly relations between our member associations in accordance with FIFA statutes and identify feasible solutions for the benefit of the game and everyone involved,” it said in a statement to AFP news agency.

The Israel Football Association responded to the HRW’s report by saying the sport was being “dragged from the football field into a political one”, but that it had faith FIFA would deal correctly with the issue.

The Palestinian Football Association (PFA) head Jibril Rajoub confirmed to AFP that it asked the Asian Football Confederation and European Union to take up the case, and it was hopeful FIFA’s executive committee would.

In theory, if the issue is not resolved, the PFA could renew its efforts to expel or suspend Israel from FIFA.

Last year, it threatened to table a resolution calling on FIFA to suspend Israel over its restrictions on the movement of Palestinian players, in a move that also included a protest over the settlement teams.

It withdrew the bid at the last minute and FIFA set up a monitoring committee to resolve the issue. The committee is due to submit its recommendations to the upcomming FIFA council meeting.

Earlier this month, a group of 66 members of the European Parliament signed a letter calling on FIFA President Gianni Infantino to ban Israeli clubs based in settlements.

The MEPs cited UEFA’s 2014 decision to ban Crimean football clubs from taking part in Russian competitions as a precedent for barring the settlement teams.

Israeli settlements in the occupied West Bank and Jerusalem are illegal under international law and have been a major stumbling block in negotiations between Palestinians and Israelis. 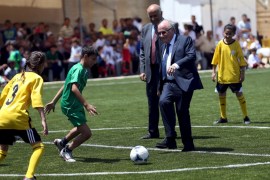