Colombian President Juan Manuel Santos and Marxist rebel leader Timochenko used a pen made from a bullet on Monday to sign an agreement ending a half-century war that killed a quarter of a million people and made their nation a byword for violence.

After four years of negotiations in Havana, Santos, 65, and Timochenko – a nom de guerre for 57-year-old revolutionary Rodrigo Londono – shook hands on Monday on Colombian soil for the first time.

Some 2,500 foreign and local dignitaries attended the ceremony in the walled, colonial city of Cartagena.

WATCH: Behind the scenes with Colombia’s insurgents as they bring their conflict to a close.

The agreement to end Latin America’s longest-running conflict turns the FARC fighters into a political party fighting at the ballot box instead of the battlefield they have occupied since 1964.

The special pen was used “to illustrate the transition of bullets into education and future”, said Santos, who staked his reputation on achieving peace.

“The UN will assist in the implementation of the accord and offer Colombians our complete support at a time that sees a new destiny for the nation,” Ban said.

The European Union said on Monday that it was removing the group from its “terror” list simultaneously with the peace signing.

Kerry praised the deal during a visit to a training centre for war victims, ex-combatants and other young people.

“Anybody can pick up a gun, blow things up, hurt other people, but it doesn’t take you anywhere … Peace is hard work,” he said.

The US Department of State has pledged $390m for Colombia next year to support the peace process. Washington would also review whether to take the FARC off its list of “terrorist organisations”, Kerry said.

Despite widespread relief at an end to the bloodshed and kidnappings of past decades, the deal has caused divisions within Latin America’s fourth-largest economy.

Influential former president Alvaro Uribe and others are angry that the accord allows rebels to enter parliament without serving any jail time.

Colombians will vote on October 2 on whether to ratify the agreement, but polls show it should pass easily.

In Cartagena on Monday, huge billboards urged a “yes” vote, while Uribe led hundreds of supporters with umbrellas in the colours of the Colombian flag urging voters to back “no”.

FARC, which stands for the Revolutionary Armed Forces of Colombia, began as a peasant revolt, became a big player in the cocaine trade, and at its strongest had 20,000 fighters. Now it must hand over weapons to the United Nations within 180 days.

Colombians are nervous over how the remaining 7,000 rebels will integrate into society, but most are optimistic that peace will bring more benefits than problems.

“I can’t believe this day has finally come,” said an excited Juan Gamarra, 43, who sells jewellery in Cartagena.

Colombia has performed better economically than its neighbours in recent years, and peace should reduce the government’s security expenditures and open new areas of the country for mining and oil companies.

But criminal gangs may try to fill the void, landmines could hinder development, and rural poverty remains a huge challenge.

With peace achieved, Santos, a member of a wealthy Bogota family, will probaby use his political capital to push an economic agenda, tax reforms in particular, to compensate for a drop in oil income caused by a fall in energy prices.

Big screens were erected around the nation of 49 million people to watch the ceremony.

“It’s such an important day,” said Duvier, a nom de guerre for a 25-year-old rebel attending a FARC congress last week in the southern Yari Plains that ratified the peace accord.

“Now we can fight politically, without blood, without war.” 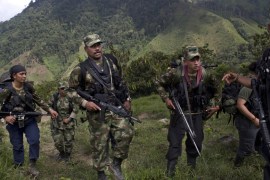