Parts of eastern Australia are experiencing their wettest spring since records began. Days, if not weeks, of heavy rain have led to some parts of New South Wales being inundated with their worst flooding in a quarter of a century.

Around 1,000 residents in the rural town of Forbes, located in the central western part of the state, were forced to leave their homes as the flood waters peaked late in the weekend.

More than 100 properties have been affected so far, with local media reporting widespread damage to crops. The rain has now eased, but the flood waters are expected to linger for much of this week.

The State Emergency Services (SES) have already had more than 2,300 calls for help. They said that the Lachlan River, which runs right through the town, peaked on Sunday night at 10.67 metres.

That height exceeded the 10.65m reached by the river in 1990 when the town was divided into two parts and 132 properties were damaged. Evacuation orders remain in place for large parts of Forbes.

The high school is being used an evacuation center and is likely to be acting as such for another five days. New South Wales Premier Mike Baird has toured the flood-hit town where he has praised the community and thanked SES volunteers for their efforts.

The next two days are expected to be largely dry with just the possibility of the occasional shower. However, a developing weather system is then forecast to roll through the Great Australian Bight.

Heavy rain and damaging winds are likely to hit South Australia and Victoria by Wednesday. This will set up a wet end to the week for eastern parts of the country.

The flood-hit parts of central western New South Wales could see another 50mm of rain by Saturday morning exacerbating the already dire situation. 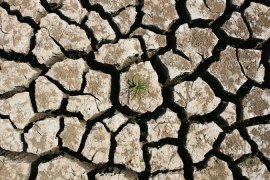 Drought grips some parts of the country while others see record rainfall. 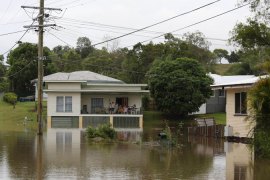