The United States, Britain and France have called for an emergency meeting of the UN Security Council to discuss the escalating violence in Syria’s second city of Aleppo following a rising civilian death toll and impending humanitarian crisis.

The United Nations says that nearly two million civilians are left without water in the embattled northern city after government bombardments damaged a pumping station and rebels shut down another in retaliation.

Intense air strikes toppled buildings and killed at least 91 civilians in Aleppo on Saturday, two days after the Syrian army announced an offensive to retake the rebel-held east of the city.

Mainstream rebel groups said on Sunday that the escalating Russian-backed bombing of besieged Aleppo had rendered any peace process futile unless there was an immediate halt to the fighting and aid deliveries under UN auspices.

“Negotiations under the present conditions are no longer useful and are meaningless,” said a statement released by 30 rebel groups including the Free Syrian Army (FSA).

The factions said they would not accept Russian mediation of any negotiations, calling it a “partner to the regime in the crimes against our people.”

The statement was signed by some of the largest factions from across Syria but did not include the powerful, ultra-conservative Ahrar al-Sham nor the al-Qaeda-linked Jabhat Fateh al-Sham.

A weeklong ceasefire agreed between the US and Russia unravelled after dozens of Syrian soldiers were killed in US-led coalition air strikes in Deir Az Zor, which the US called a mistake. The Syrian army resumed its military offensive after the strikes.

Efforts to revive the truce have failed so far with the West, which is opposed to the government of President Bashar al-Assad, and Russia have engaged in a blame game amid a continued humanitarian tragedy.

The US and its European allies have been pressing Moscow to allow unfettered humanitarian assistance, halt the Syrian government’s “indiscriminate” bombing of its own people and create the conditions necessary to resume political transition talks led by the UN.

UN Secretary General Ban Ki-moon earlier said that he was appalled by the “chilling” upsurge in fighting in Aleppo, and warned that the use of advanced weaponry in the battleground city could amount to war crimes.

Ban cited reports of air strikes involving the use of incendiary weapons, bunker buster bombs and other powerful munitions in the offensive launched by the Syrian army two days ago to recapture the city.

“We do not have enough doctors to cope with such a high number of casualties,” said Ibrahim al-Hajj, a volunteer with the White Helmets, a rescue group that operates in rebel-held districts. He said more than 200 injured people are in makeshift hospitals.

Photos and videos released by activists showed injured people lying on floors due to a lack of beds, covered in blood.

Speaking to Al Jazeera late on Saturday, Abdulkafi al-Hamdo, a professor at the University of Aleppo, said that residents were expecting another night of horror.

“What we are suffering can’t be expressed by words in any language,” he said.

“We don’t have water to give our children … [Rescuers] can’t help people any more and the roads have been cut off by rubble. In the hospitals, there are three to four people on one bed, even in the intensive care units.”

Meanwhile, Syrian rebels said late on Saturday that they had regained control of Handarat, a former Palestinian refugee camp north of Aleppo city, after it had earlier fallen to government soldiers.

Rami Abdulrahman, the director for the UK-based Syrian Observatory for Human Rights, said that the fighting was “back and forth” and inconclusive.

“The shelling and the raids did not stop. It is continuous,” Bahaa al-Halabi, an activist in eastern Aleppo, told DPA news agency.

Humanitarian deliveries have been further hampered by an attack on Monday on an aid convoy outside Aleppo, which killed 21 people. The US blames Russia, but Moscow has denied its involvement.

However, 36 lorries from the international Red Cross entered al-Waer, a district in central Homs province. This week, hundreds of rebels and their families evacuated the area, under a deal.

Five years on, more than  400,000 Syrians are estimated  to have been killed, and almost 11 million Syrians – half the country’s prewar population – have been  displaced  from their homes. 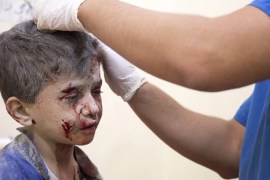 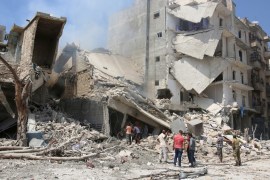 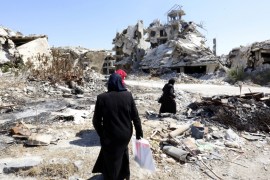