A 19-year-old man was killed by Indian government forces after they fired shots at protesters demanding freedom from Indian rule in the disputed Himalayan region of Kashmir.

A police officer, speaking on condition of anonymity to the Associated Press news agency, said the man died in the northwestern Sopore area on Friday after soldiers opened fire on demonstrators who allegedly attacked an army convoy with stones.

However, residents and family members said the man, Waseem Ahmad, was working in his orchard along with other people when soldiers fired.

There was no protest or stone pelting. Everything was quiet. He was killed without a reason. It was a cold blooded murder.

“Waseem was going along with a few boys towards his paddy fields to help his uncle when four army vehicles drove up and soldiers opened fire on him,” Lone told Al Jazeera

“There was no protest or stone pelting. Everything was quiet. He was killed without a reason. It was a cold-blooded murder.”

A local doctor told the Greater Kashmir newspaper that a round went through Ahmad’s back and hit his heart.

“The bullet had damaged his heart and caused instant death,” said Dr Masood, of District Hospital Baramulla, in north Kashmir.

Protesters took to the streets of the village after news of Ahmad’s death, chanting “We want freedom” and clashed with government forces.

Fighting also erupted in at least three other places and at least 30 people were reported injured.

A strict curfew was also imposed on Old Srinagar and south Kashmir.

Kashmir has been divided between India and Pakistan since the two countries gained independence from British rule in 1947. Both claim the territory in its entirety.

The latest protests were sparked by the killing of a popular rebel commander, Burhan Wani, in July.

The demonstrations, and a sweeping security crackdown, have all but paralysed life in Indian-administered Kashmir.

More than 80 civilians have been killed and thousands wounded, including hundreds blinded and maimed mostly by government forces firing live rounds and shotgun pellets at rock-throwing protesters.

Two policemen have also been killed and hundreds of government forces hurt in the clashes.

Meawhile, tensions continue to rise between India and Pakistan over the Kashmir issue following the Uri attack in the Indian-administered Kashmir that left 17 Indian soldiers dead.

No group claimed responsbility but India has blamed Pakistan and armed groups based in the country for the incident.

Pakistan’s Prime Minister Nawaz Sharif denied his country’s involvement and labeled India’s handling of the uprising in Kashmir as “barbarism” at the UN General Assembly in New York last week.

Sharif also called for called for an independent inquiry and a UN fact-finding mission into “rights violations” in Kashmir as well as for renewed talks with India.

Earlier this month, India refused to allow Kashmiri human rights activist Khurram Parvaz to travel to Geneva to participate in a session of the UN Human Rights Council.

Parvez was subsequently arrested for “inciting violence”, a move that outraged human rights activists worldwide. At least 50 international scholars, including Noam Chomsky and Arundhati Roy, have signed a petition calling for his release. 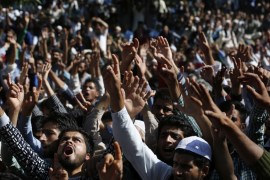