Gabon’s constitutional court has upheld President Ali Bongo’s re-election victory, rejecting an appeal by rival Jean Ping who had called for a recount over widespread allegations of fraud.

The decision, read late at night in an almost empty court chamber, raised the prospect of a repeat of the violence that erupted with the announcement earlier this month of Bongo’s narrow victory over Ping in the August 27 poll.

Six died in riots that caused major damage in the capital, Libreville, and elsewhere in the country of some 1.8 million people.

The court cancelled results from 21 polling stations in Libreville over irregularities but at the televised public hearing, the court said Bongo had taken 50.66 percent of the vote against 47.24 percent for Ping.

Bongo’s family has ruled the central African oil producer for nearly a half century.

In a speech immediately after the court ruling, Bongo renewed a call for an open political dialogue to bring his allies and opponents together to work together in the country’s best interest.

“When we come out of an election and families are having to mourn their dead, it means we’ve betrayed democracy,” he told a crowd of supporters, who minutes later erupted into a rendition of Gabon’s national anthem.

There has been little indication that Ping, who has claimed he won the poll, is ready to enter talks with the government.

Al Jazeera’s Nicolas Haque, reporting from Libreville, said most people were still unaware of the ruling since it came late in the night.

“The ruling was delivered around 1am so most people are asleep and don’t know Ali Bongo has been confirmed as their next president,” he said.

“But it’s also interesting to note that the judge, despite confirming Bongo as the winner, said there were irregularities in voting counts in both camps, suggesting that both cheated during the election.”

In his petition to the court, Ping alleged fraud in Haut-Ogooue province, where Bongo won 95 percent on a turnout of 99.9 percent.

A European Union elections observer mission stated that it had uncovered anomalies in the province’s results.

The court refused to accept copies of vote tally sheets provided as evidence by Ping, many of which it said were illegible. Ping’s legal team was absent from the courtroom as the ruling was announced.

At the Libreville residence of the opposition leader – a former African Union Commission chairman – about a dozen of his supporters sat beside a swimming pool, watching in silence as a judge read the court’s decision live on television.

The government had stepped up security in Libreville in the days leading up to the court ruling, deploying extra police and soldiers on the streets in an effort to head off trouble.

The streets of Libreville were empty before the ruling, with residents fearing a new bout of bloodshed.

Officers in riot gear had begun fanning out through the city on Thursday, and by Friday morning, long queues could be seen outside banks and cash machines.

“Everyone is panicking, everyone is afraid,” said Jean Rodrigue Boukoumou, a teacher who like many others was waiting to withdraw his money to stock up on food. 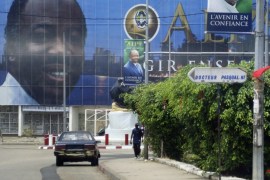 Election observers say “integrity” of result has been compromised by “clear anomaly” in country’s Haut-Ogooue province.