Racial tensions in the United States have reached boiling point after protests in Charlotte against police killings of black men turned increasingly violent, forcing the North Carolina governor to declare a state of emergency in the city.

His death followed another police killing of a black man in Tulsa on Friday, Terence Crutcher. Protests are also ongoing in the Oklahoma city.

The protests in Charlotte late on Wednesday saw one person critically injured after being shot. Police said that victim, who they did not identify, was shot by a civilian.

Authorities have been attempting to quell public anger after Scott’s death, with police in riot gear firing tear gas at protesters and arresting those they accuse of violence.

Mark Thompson, a radio host of Make it Plain, a show focusing on human rights, told Al Jazeera: “This is tragic. It’s a very sad night for the people of Charlotte. As Dr [Martin Luther] King said, so-called riots are the language of the unheard. It’s an extension and direct result of the modern-day lynching of Keith Lamont Scott.”

Police say Scott disregarded repeated demands to drop his gun, while neighbourhood residents say he was holding a book, not a weapon, as he waited for his son to get off the school bus.

“You have to wonder what is the real rioting going on?” Thompson told Al Jazeera.

While a police video of the fatal shooting of Scott has not been released, a video showing the moment Crutcher died in the Tulsa shooting was made available for public viewing.

READ MORE: One shot during rally against Charlotte police shooting

“We know [from that video] without a doubt Terence Crutcher had his hands in the air,” said Thompson.

The protests in Charlotte included shutting down the eight-lane Interstate 85 and burning the contents of a tractor-trailer.

Al Jazeera’s Alan Fisher, reporting from Charlotte, said: “They [protesters] want to make the point that what happened [Tuesday’s police shooting] is unacceptable.”

North Carolina Governor Pat McCrory announced late on Wednesday that he was accepting a request from Charlotte’s police chief, declaring a state of emergency and calling in the National Guard and state troopers to help restore order and protect downtown.

Protesters have been chanting “Black lives matter” and “Hands up; don’t shoot”. But some clashes between protesters and police saw officers fire flash grenades and marchers throw fireworks in return.

John Barnett, who runs a civil rights group called True Healing Under God, or THUG, warned that the video might be the only way for the police to regain the community’s trust.

“Just telling us this is still under investigation is not good enough for the windows of the Wal-Mart.”

On Wednesday morning, Kerr Putney, Charlotte-Mecklenburg police chief, said: “It’s time to change the narrative, because I can tell you from the facts that the story’s a little bit different as to how it’s been portrayed so far, especially through social media.”

Putney said officers were serving arrest warrants on another person when they saw Scott get out of a vehicle with a handgun.

A black officer – named as Brentley Vinson – shot Scott after the officer and other uniformed members of the force made “loud, clear” demands that he drop the gun, the chief said.

Putney said Scott posed a threat even if he did not point his weapon at officers, and said a gun was found next to the dead man.

“I can tell you we did not find a book,” the chief said.

Neighbours, though, said that the officer who fired was white and that Scott had his hands in the air.

The three uniformed officers had body cameras; the plainclothes officer did not, police said.

But Putney said he cannot release the video because the investigation is still under way. No mobile-phone video has emerged on social media, as happened in other cases around the country.

Vinson, a two-year member of the department, has been placed on leave, standard procedure in such cases.

“It is so essential to know what actually took place,” Andrew Jerell Jones, a political writer, told Al Jazeera.

He said the protests were “a result of what took place not just on Tuesday evening, but throughout many years throughout the history of Charlotte”. 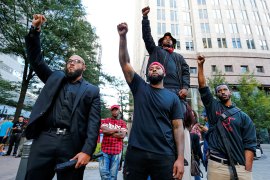