Neither Russian nor Syrian aircraft bombed an aid convoy in Syria’s Aleppo, Moscow said on Tuesday, as outrage mounted over an attack that some called a war crime.

The Red Cross said at least 20 people were killed in the attack on trucks carrying desperately needed humanitarian relief to thousands of Syrians.

“The air forces of Russia and Syria did not conduct any strikes against the UN aid convoy in the southwestern outskirts of Aleppo,” defence ministry spokesman Igor Konashenkov said in a statement carried by Russian news agencies.

Konashenkov said the attack the previous night doesn’t appear to have been from an air strike.

The Syrian Civil Defence, a volunteer rescue group known as the White Helmets that operates in rebel-held areas, posted images of several vehicles on fire. A video of the attack showed huge balls of fire against the night sky as ambulances arrived on the scene.

The Russian military “carefully studied the video recordings of the so-called activists from the scene and found no signs that any munitions hit the convoy”, Konashenkov said.

“Everything shown on the video is the direct consequence of the cargo catching fire, and this began in a strange way simultaneously with militants carrying out a massive offensive in Aleppo.”

The United Nations has suspended all aid convoys to Syria following the attack on aid trucks, which could amount to a “war crime”, according to UN official Jens Laerke.

A rescue worker who witnessed the convoy attack said more than 20 missiles pounded the area for hours, even hitting his team as they searched the debris for survivors. Hussein Badawi, who leads the White Helmets in Uram al-Kubra, accused Syrian and Russian aircraft of taking part.

Ban Ki-moon, UN secretary-general , speaking at the General Assembly in New York, called those who attacked the convoy “cowards”.

“Powerful patrons that keep feeding the war machine also have blood on their hands,” Ban said.

The US said it was unclear if it was a Russian or Syrian plane that hit the 31-truck UN aid convoy late on Monday, but officials placed the blame on Moscow, the key ally of embattled Syrian President Bashar al-Assad.

“The Americans are firmly blaming the Russians, saying they’re not reining in Damascus,” Al Jazeera’s Stephanie Dekker reported from Gaziantep, on the Syrian border.

The convoy was part of a routine inter-agency dispatch operated by the Syrian Arab Red Crescent.

Following Monday’s aid convoy strike, the UN said it was suspending all convoy movement in Syria, and Peter Maurer, the International Committee of the Red Cross president, said the attack could have “serious repercussions” on humanitarian work in the country.

The new wave of bloodshed came after the Syrian army unilaterally declared the end of a week-long truce brokered by the US and Moscow.

The government and the rebels traded blame over the collapse, each accusing the other side of hundreds of breaches.

“If this callous attack is found to be a deliberate targeting of humanitarians, it would amount to a war crime,” said Stephen O’Brien, the top UN humanitarian official, adding the warring parties had been told about the aid convoy.

The Syrian Arab Red Crescent was also hit during Monday’s strike, as was a warehouse run by the group.

SARC volunteers were among at least 28 civilians killed in the Aleppo area in the first hours after violence resumed following the formal end of the truce, according to the UK-based Syrian Observatory for Human Rights.

The rebel-held area east of Aleppo city, home to some 300,000 people, has been cut off from aid deliveries since July despite the ceasefire.

Ground battles between pro-government forces and rebel fighters raged on Tuesday on the southwestern outskirts of Aleppo city near the strategic Ramosa military complex, according to the Syrian Observatory, as air raids pounded the northern province.

The ceasefire came into effect on September 12. Under terms of the agreement, the successful completion of seven days of calm and humanitarian aid deliveries would be followed by an ambitious second-stage plan to set up a joint US-Russian coordination centre to plan military strikes against the Islamic State of Iraq and the Levant (ISIL) and Jabhat Fateh al-Sham, formerly the al-Qaeda-linked al-Nusra Front.

But from the start, the truce was beset by difficulties and mutual accusations of violations. 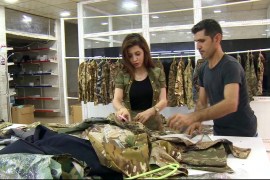