Iraqi forces launched an operation on Tuesday to retake a northern town from ISIL, a stepping stone in the campaign to recapture the main city of Mosul before year end.

Tens of thousands of civilians are thought to be trapped in Sherqat, which lies on the River Tigris 100km south of Iraq’s second-largest city. It has been surrounded by Iraqi troops and militias allied to the government.

Officials have warned for months of a humanitarian disaster inside, where residents living under Islamic State of Iraq and the Levant’s harsh rule say food supplies have dwindled and prices soared.

“The operation to liberate Sherqat started at 5:30am [0230 GMT] from several directions … with the support of coalition forces,” Joint Operations Command spokesman Yahya Rasool told the AFP news agency.

“We are making good progress. Sherqat is important, we can’t move on Mosul and have terrorists control Sherqat.”

Iraqi troops, backed by local police and Sunni tribal fighters, took up positions along five axes on Tuesday and advanced through five villages, but by midday they were still about 13km from the town centre, officials told the AP news agency.

There was little resistance so far, apart from some bombs planted along the road.

Iraqi forces are also moving to retake two areas in the western province of Anbar, Prime Minister Haider al-Abadi said in an televised message from New York, where he attended the UN General Assembly.

“These operations pave the way for cleansing every inch of Iraqi land and, God willing, its end will be the liberation of Mosul city,” he said.

Abadi has pledged repeatedly to retake Mosul by year’s end, and Iraqi commanders have indicated the push could begin by late October, though doubts remain that the necessary troops will be ready.

Iraqi and US officials are also concerned there has not been enough planning for how to manage Mosul, a mosaic of ethnic and sectarian groups, if and when ISIL is removed. 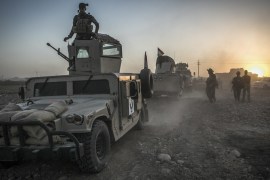 Kurdish forces say they fear an increase in ISIL’s chemical attacks to weaken the frontlines as Mosul offensive looms. 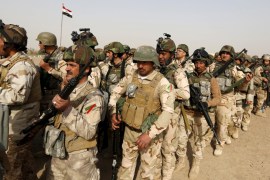