Thousands of people were forced to flee to safety on Monday after a fire, set on purpose according to police, tore through a refugee camp on the Greek island of Lesbos.

No casualties were reported but tents at the Moria camp were “almost entirely destroyed” and containers that provide additional accommodation and health and registration services were damaged, a police source in Athens told AFP.

Greek news agency ANA said the arson began because of fighting between different nationalities in the camp, while Athens-based newspaper Kathimerini said the fires were lit after rumours circulated that refugee deportations to Turkey were being planned.

“Between 3,000 and 4,000 migrants fled the camp of Moria,” to the surrounding fields, with firefighters being hampered by strong winds that fanned the flames, the police source said.

Police were sent out after the migrants and were in the process of returning them to the camp, the officer added.

The officer said there was “no doubt” that the fire had been set on purpose by those inside.

Some 150 minors housed at the camp were taken to a children’s village on the island, the officer said.

Another two fires broke out in the olive groves near Moria but were brought under control before the third blaze erupted at the camp.

There are now more than 60,000 refugees and migrants in Greece, most of them seeking to travel to Germany and other EU countries.

But they are unable to do so after several eastern European and Balkan states shut their borders earlier this year.

Human rights groups have repeatedly criticised the condition of Greek camps for migrants and refugees, pointing to overcrowding and unsanitary living conditions.

The situation is particularly acute on Lesbos and other eastern Aegean islands facing Turkey, where most of the refugees and migrants land and are held for registration.

Island residents have staged protests to demand the transportation of the migrants to the mainland.

The procedure is part of an EU-Turkey deal designed to limit the flow of refugees and migrants to Greece’s shores.

According to government data, there are more than 13,000 people on five islands in facilities built to house fewer than 8,000.

Most of them are Syrian refugees fleeing civil war, in addition to Iraqis, Afghans, and Pakistanis fleeing violence and persecution at home, who, along with others from the Indian subcontinent and north Africa, are not automatically entitled to asylum in Europe.

On Lesbos itself there are in excess of 5,600 people, more than 2,000 more than the nominal capacity of the camps.

Brawls are common, with many desperate to avoid being returned to Turkey or their home countries after spending a small fortune and risking their lives trying to escape poverty and persecution.

The fire comes as UN member states on Monday promised to try to improve the plight of millions of refugees around the world.

“If we fail to support this, the political repercussions will be felt not only in Greece but everywhere,” he said.

“We will give space to nationalistic, xenophobic forces to show their face for the first time since World War II.”

More than 850,000 migrants arrived on the Greek islands last year, many after risking their lives in unseaworthy boats and dinghies. 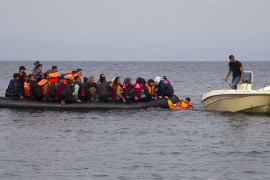 After witnessing “women and children in the water screaming for help, many people’s world view changed”. 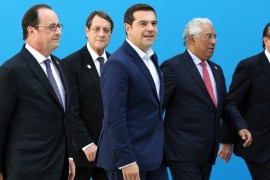 Athens says it cannot afford to take in more asylum seekers from other EU countries as stipulated by Dublin Regulation.