A Palestinian was shot dead by Israeli soldiers after trying to stab one of them near the West Bank town of Hebron, according to the Israeli army – the latest of a recent surge in such incidents.

“An assailant armed with a knife attempted to stab a soldier at a checkpoint at the entrance to [the southern town of] Bani Naim,” an army statement said on Tuesday morning.

“Responding to the immediate threat, forces fired at the assailant, resulting in his death.”

UPDATE: Assailant armed with a knife attempted to stab an IDF soldier near Hebron. Responding to the immediate threat, forces shot assailant

Since October, 230 Palestinians, 34 Israelis, two Americans, one Jordanian, an Eritrean and a Sudanese have been killed in ongoing violence, according to a count by the AFP news agency.

Israel says that most of the Palestinians killed were carrying out knife, gun or car-ramming attacks. Others were shot dead during protests or Israeli air raids on Gaza.

Nine attacks on Israeli forces, including this latest one, have been reported since Friday as Israel tightened security before major Jewish holidays in October.

The upsurge in bloodshed has shattered several weeks of relative calm. 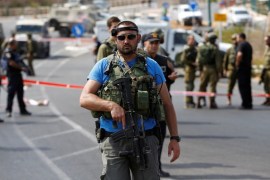 An alleged attacker shot in the head after stabbing an Israeli soldier near in the occupied West Bank, Israelis say. 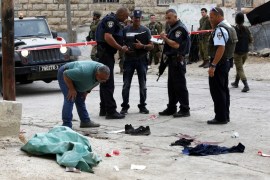 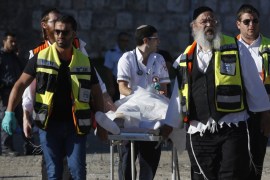