Libreville, Gabon – Tensions are simmering in Gabon after two days of violence over the disputed presidential election, with fears growing over more deaths and detentions.

Since results were announced on Wednesday, confirming President Ali Bongo would continue to lead the Central African country, at least five people were killed in clashes and the parliament building was set on fire.

More than 1,000 people have been arrested in the same period.

AFP news agency said at least two of those killed died in clashes with police late on Thursday.

President Bongo has accused the opposition of coordinating attacks.

In footage captured by Al Jazeera, burned out cars and bonfires pepper the city.

Protests over the election results started around the headquarters of opposition leader, Jean Ping, and quickly spread to other areas.

Amid the unrest, a large mall was looted.

“They started to break in by that door and entered, then they tried to start a fire,” Moustafa Zalzi, the mall owner, told Al Jazeera.

Pelagui Lendoni runs a shop in the complex, which was almost entirely destroyed.

“My sister [who owns the business] is in France, but I’ve asked my other sister to come and help me with what’s remaining because these people might come back,” she told Al Jazeera.

For his part, President Bongo has warned against the violence.

“Democracy is not destruction. Destroying parliament and the national television is not democracy. Democracy is difficult, but we should work on it,” he said in an address earlier this week.

Supporters of Ping, who lost the election by fewer than 6,000 votes, believe the vote was rigged and, along with the opposition leader, have demanded a recount.

“Everybody inside and outside the country knows, perfectly, I am the winner for sure. There is no doubt about it,” Ping told Al Jazeera by phone, following the results.

The president and his ministers say that only the constitutional court can order a recount, and a petition must be filed.

Many continue to take to the streets but they are quickly dispersed.

Police blocked Al Jazeera from entering certain areas where protests take place. In various parts of the city, there is a heavy military and police presence.

The United Nations said it was concerned over reports that the internet had been blocked since the result came out, while the European Union and the United States have called for transparency. 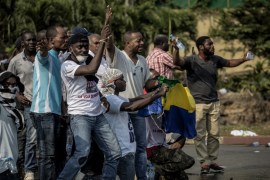