The US military said that the coalition stopped its strikes against what it believed to be Islamic States of Iraq and the Levant (ISIL) group positions in the eastern city of Deir Az Zor on Saturday after Russia informed it that Syrian military personnel and vehicles may have been hit.

“We are investigating the incident,” Samantha Power, the US ambassador to the United Nations, told journalists as the emergency Security Council meeting, called by Russia, got under way in New York.

“If we determine that we did indeed strike Syrian military personnel, that was not our intention. And we of course regret the loss of life.”

If confirmed, it would mark the first known direct American strike on forces loyal to Syrian President Bashar al-Assad.

Russia said that 62 Syrian soldiers were killed and at least 100 more wounded in strikes by “warplanes from the international anti-jihadist coalition”.

The Russian military said two F-16 and two A-10 jets flew into Syrian airspace from neighbouring Iraq to carry out the raids.

The UK-based Syrian Observatory for Human Rights monitoring group gave a toll of 83 soldiers killed, as it confirmed the strikes were US-led coalition raids.

A US military official speaking to the AFP news agency appeared to confirm the attack, saying “we believe about a half-dozen vehicles, including what we think was a tank, were struck as well as personnel who were out in the open”.

The Australian Department of Defence said on Sunday that its planes had participated in the strikes and offered condolences to the families of Syrian soldiers killed or wounded in the incident.

Power accused Russia of pulling a “stunt” by calling for an emergency Security Council meeting to demand an explanation from the US. She said Moscow should instead demand a meeting with the Syrian government to press for peace.

“Russia really needs to stop the cheap point scoring and the grandstanding and the stunts and focus on what matters, which is implementation of something we negotiated in good faith with them,” Power told reporters before the meeting.

Russian Ambassador to the UN Vitaly Churkin responded by accusing the US of violating agreements that it would not target Syrian positions and said the action was a “bad omen” for a US-Russian deal on halting the fighting in Syria.

Washington and Moscow reached an agreement in September that calls for a ceasefire, the delivery of aid and the joint targeting of the  ISIL, also known and ISIS, and Jabhat Fateh al-Sham.

The ceasefire came into effect on Monday and has largely held, despite dozens of alleged violations.

Al Jazeera’s senior political analyst Marwan Bishara said Moscow used the incident to underline the importance of communication between Russia and the US in military operations in Syria.

“What the Russians are saying today is you – the Americans – because you don’t want to coordinate on the ground these sorts of mistakes are going to happen more often. It’s quite foggy in terms of coordination on the ground. With the various violations of the ceasefire, you’re going to see more friendly type fire going on,” Bishara said.

US Secretary of State John Kerry and Russian Foreign Minister Sergey Lavrov are due on Wednesday to attend a special Security Council meeting on Syria, held on the sidelines of the UN General Assembly meeting.

Syria’s army said the US-led strikes, which took place at around 5pm local time (1400 GMT), were “conclusive evidence” of US support for ISIL, calling them “dangerous and blatant aggression”.

The US military said in its statement that Syria was a “complex situation” but that “coalition forces would not intentionally strike a known Syrian military unit”.

ISIL said via its Amaq news channel that it had taken complete control of Jebel Tharda, where the bombed position was located, which would have allowed it to overlook government-held areas of Deir Az Zor.

The city’s airport and some districts have been entirely surrounded by ISIL since last year, with the airport providing their only external access.

However, Russia and Syrian state media said the Syrian army later recaptured positions it had lost.

Earlier on Saturday, Russia and Syrian rebels cast doubt on the prospects for the increasingly shaky ceasefire, with Moscow saying that the situation was worsening and a senior rebel warning that the truce would “not hold out”.

While the ceasefire has reduced fighting, low levels of violence have persisted across Syria. Meanwhile, there has been little movement on promised aid deliveries to besieged areas, and both sides have accused the other of bad faith.

Russia’s defence ministry said conditions in Syria were deteriorating, adding that it believed the ceasefire had been breached 199 times by rebels and saying the US would be responsible if it were to collapse.

After the Deir Az Zor attack, it said Moscow had told the US to rein in the Syrian opposition and make sure it did not launch a new offensive, adding that it had informed Washington about a concentration of rebels north of Hama.

Rebels say they only reluctantly accepted the initial deal, which they believe is skewed against them, because it could relieve the dire humanitarian situation in besieged areas they control, and blamed Russia for undermining the truce.

“The truce, as we have warned, and we told the [US] State Department – will not hold out,” a senior rebel official in Aleppo told the Reuters news agency on Saturday, pointing to the continued presence of a UN aid convoy at the Turkish border awaiting permission to enter.

Rebels have also accused Russia of using the ceasefire to give the Syrian army and allied Shia militias a chance to regroup and deploy forces ready for their own offensives.

Both sides have accused the other of being responsible for aid deliveries being stuck far from Aleppo, where army and rebel forces were supposed to pull back from the Castello Road, a key route into leading they city’s besieged, rebel-held eastern districts.

Two convoys of aid for Aleppo have been waiting at the Turkish border for days. The UN has said both sides in the war are to blame for the delay of aid to Aleppo, where neither has yet withdrawn from the Castello Road. 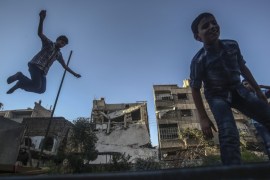