Convoys carrying humanitarian aid to Syria’s besieged Aleppo city have been held up for yet another day, as fighting between Syrian forces and rebels outside Damascus raised concerns about whether a fragile ceasefire could hold.

The fighting on Friday was described as some of the most serious since the truce came into effect on Monday, with both the government and rebels accusing each other of breaching the US-Russia brokered agreement.

In a sign of rising tensions, Washington told Moscow on Friday that potential military cooperation in Syria would not happen unless it pressured the Syrian government to allow aid into besieged areas.

The US and Russia agreed last week to set up a committee that would enable joint targeting of the Islamic State of Iraq and the Levant (ISIL, also known as ISIS) and Jabhat Fateh al-Sham groups in Syria if a ceasefire held for seven days and unfettered humanitarian aid was allowed to flow into the country.

Aid for Aleppo, however, has been stuck on the Turkish border for five days now, with the UN calling on the Syrian government to “immediately” allow life-saving supplies into the city’s rebel-held areas, where about 300,000 people are living under siege.

In a phone call on Friday to his Russian counterpart Sergey Lavrov, US Secretary of State John Kerry condemned “repeated and unacceptable delays of humanitarian aid”, according to John Kirby, a State Department spokesman.

Kerry told Lavrov that Washington “expects Russia to use its influence on the Assad regime to allow UN humanitarian convoys to reach Aleppo and other areas in need”, Kirby said

The two countries back opposite sides in the conflict, with Moscow supporting the government of President Bashar al-Assad and the US supporting a coalition of rebel groups.

Both ISIL and Jabhat Fateh al-Sham, the group formerly known as al-Nusra Front, are excluded from the ceasefire.

The US and Russia agree on the value of extending the cessation of hostilities, despite some continuing violence, Kirby said.

Russia on Friday said that only its ally, the Assad government, was respecting the ceasefire, but nevertheless suggested that the truce be prolonged by a further 72 hours.

The Kremlin also said that it was using its influence to try to ensure the Syrian army fully implemented the ceasefire agreement and that it hoped the US would also use its influence with rebel groups.

Hours-long fighting and shelling erupted in neighborhoods on the edges of Damascus on Friday, with activists and residents calling the clashes the heaviest in the Syrian capital for weeks.

According to the UK-based Syrian Observatory for Human Rights, the fighting between government troops and rebels was concentrated in the neighbourhood of Jobar, next to Qaboun, where rebels have had a presence for years.

Mazen al-Shami, an opposition activist near Damascus, said government forces tried to storm Jobar but were repelled by opposition fighters.

“This is one of the most serious violations of the ceasefire,” al-Shami told the Associated Press news agency via Skype.

“There are violations, but it has been made very clear by the US and Russia that this was expected,” said Al Jazeera’s Stefanie Dekker, reporting from Kilis on the Turkish side of the border with Syria.

“The levels [of violence] are by no means to call this [ceasefire] off.”

Despite the “real reduction in violence”, continued Dekker, the UN has said it is “incredibly frustrated” over not being able to obtain the necessary permits from the Syrian government to let aid into Syria.

As part of the deal, the strategic Castello Road leading into rebel-held eastern Aleppo was meant to be demilitarised for aid to enter.

The United Nations had hoped that 40 lorries of food would be delivered there as part of the truce.

“There seems to be little pullback by both sides [Syrian government and rebels] on that road to allow this aid in,” Al Jazeera’s Charles Stratford, reporting from Gaziantep on the Turkish border with Syria, said.

Moscow said the Syrian army had begun to withdraw from Castello Road on Friday but was forced to return after its forces “came under attack by rebels using small arms fire”, Stratford said, quoting Russian officials.

Later on Friday, the UN Security Council cancelled an urgent meeting to discuss the Syria ceasefire deal at the request of the US and Russia, according to diplomats.

The meeting had been called to allow US and Russian envoys to present details of the joint agreement, including the delivery of aid and joint military operations.

Earlier reports had quoted Russian Ambassador Vitaly Churkin as saying on Thursday that he hoped the council would adopt a resolution endorsing the truce deal at next week’s high-level General Assembly.

In a separate development, air strikes on Friday reportedly killed 23 civilians and wounded 20 others near Deir Az Zor, an eastern town controlled by ISIL. The attacks in al-Mayadin hit a school housing civilians who had fled the violence, according to the Syrian Observatory.

The monitoring group said at least half of those killed were women and children, adding that it was unclear who had carried out the raids. 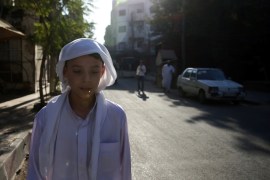 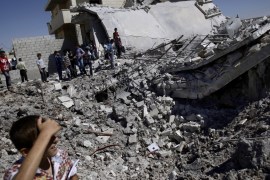 US, Russia hail breakthrough to put peace process back on track, including nationwide ceasefire effective from Monday.