Hillary Clinton is back on the campaign trail and has accused rival Donald Trump of fostering ugliness and bigotry by refusing to acknowledge that President Barack Obama was born in the US.

Taking the stage shortly after Obama on Thursday, Clinton noted at a gala of the Congressional Hispanic Caucus Institute in Washington DC that Trump had declined to acknowledge the outgoing president had been born in the US.

Trump, who helped to fuel the rise of the so-called Birther Movement, told The Washington Post newspaper in an interview that he would “answer that question at the right time. I just don’t want to answer it yet”.

“This man wants to be our next president? When will he stop this ugliness, this bigotry?”

The Trump campaign released a statement late on Thursday saying Trump “believes that President Obama was born in the United States”.

It also made an accusation that Clinton launched the Birther Movement during her unsuccessful primary run against Obama in 2008.

Obama and Clinton made successive appeals to 3,000 Hispanic leaders and supporters on Thursday, pointing to a large turnout of Latino voters as the antidote to Trump.

Both noted the Republican’s hard line on immigration, referring to his opposition to a comprehensive overhaul of the system and his pledge to build a wall along the Mexican border.

Obama said that the political season’s discussion of immigration “has cut deeper than in years past. It’s a little more personal, a little meaner, a little uglier”.

He said Latinos need to “decide who the real America is” and push back against the notion that the nation “only includes a few of us”.

“We can’t let that brand of politics win. And if we band together and organise our communities, if we deliver enough votes, then the better angels of our nature will carry the day,” Obama said.

The rally marked Clinton’s first public appearance since Sunday, when she abruptly left a 9/11 memorial service after getting dizzy and dehydrated.

She had been diagnosed with pneumonia on Friday, but the campaign informed the public only after the video of an ill Clinton emerged.

Clinton on Thursday promised again to complete Obama’s unsuccessful push to achieve comprehensive immigration reform, including a pathway to citizenship for the estimated 11 million immigrants who are in the country illegally.

She reiterated her intention to release a plan to overhaul the immigration system during her first 100 days in office and expand programmes that have protected some groups of immigrants from deportation, including those who arrived in the US as children and the parents of US citizens and legal permanent residents.

Pointing to the benefits of a diverse nation, Clinton seized upon Trump’s unwillingness to say Obama was born in the US and his past support for the Birther Movement questioning Obama’s citizenship.

“We need to stand up and repudiate this divisive rhetoric,” Clinton said. “We need to stop him conclusively in November in an election that sends a message that even he can hear.”

While Obama and his potential successor did not appear onstage together, they did chat for about 15 minutes backstage. The event represented a passing of the torch before a key Democratic constituency.

Obama captured 71 percent of Latino voters against Republican Mitt Romney in 2012, a lopsided outcome that Clinton hopes to replicate with about eight weeks remaining before Election Day.

READ MORE: Five things to know if Clinton or Trump were to drop out

Facing tightening polls against Trump, Clinton could find that her ability to garner big margins from Hispanics will be critical in battleground states such as Florida, Nevada and Colorado.

Obama made no mention of Trump by name but alluded to his candidacy, saying if the nation is going to fix the immigration system, “then we’re going to have to push back against bluster and falsehoods and promises of higher walls. We need a comprehensive solution.”

Obama’s attempt to shield parents from deportation is in limbo after the Supreme Court deadlocked on a decision in a case challenging the president’s authority to expand the deportation protection programme.

Obama is stepping up his campaign activities on behalf of Clinton. 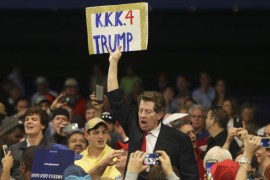 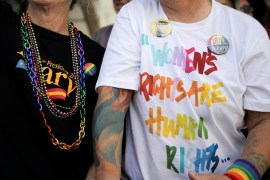 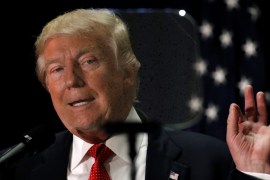