No humanitarian aid has entered Syria yet, the UN says, despite the de-escalation of violence across the country following the coming into effect of a nationwide ceasefire.

Al Jazeera has learned from diplomatic sources that no route for the delivery of aid has been agreed upon yet.

The Syrian foreign ministry on Tuesday said it would not allow any humanitarian aid to enter the rebel-held side of Aleppo without coordination with the Syrian government and the UN.

It said Turkish convoys in particular would not be allowed into Syria.

The Syrian state news agency SANA, quoting the foreign ministry, said: “Commenting on the Turkish regime’s statements highlighting its intention to send materials disguised as humanitarian aid to Aleppo city, the Syrian Arab Republic announces its rejection to allow such materials to enter no matter who provides them, including the Turkish regime in particular, without coordination with the Syrian government and the UN.”

Nevertheless, Turkey says it is making preparations to deliver humanitarian aid to Aleppo, where about 250,000 people in the rebel-held east are under government siege.

A Turkish Red Crescent official told Al Jazeera on Wednesday that trucks carrying aid belonging to the organisation were still at the Cilvegozu border crossing in Hatay, waiting for a go-ahead from the UN to enter Syria.

The official said the trucks will be using only UN flags as per a Russian request.

For his part, Staffan de Mistura, the UN special envoy for Syria, has said he hopes the trucks would be able to move very soon.

“Today calm appears to have prevailed across Hama, Latakia, Aleppo city and rural Aleppo and Idlib, with only some allegations of sporadic and geographically isolated incidents,” he said in Geneva, Switzerland, on Tuesday, more than 24 hours after the declaration the ceasefire deal brokered by US and Russia.

Although there was some violence after dusk on Monday, by early morning guns had fallen almost entirely silent, de Mistura said.

“Sources on the ground, which do matter, including inside Aleppo city, said the situation has dramatically improved with no air strikes.”

The deal set off a seven-day period that will allow for humanitarian aid and civilian traffic into Aleppo, Syria’s largest city, which has faced a recent onslaught. 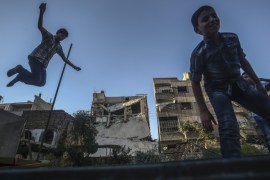 The UN hails significant reduction in violence over the first 24 hours of a new ceasefire brokered by the US and Russia. 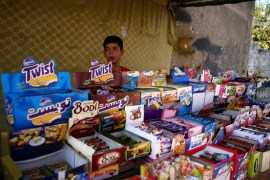