Two protesters have been killed and scores wounded in clashes with security forces in Indian-administered Kashmir, bringing the death toll after months of unrest to 82, as a security crackdown marred Eid festivities in the disputed region.

One protester was killed on Tuesday after being struck on the head by a tear-gas shell in the northern district of Bandipora, a police officer told the Associated Press news agency on condition of anonymity.

Another protester was killed by pellet ammunition fired from shotguns in Shopian, in the south of Kashmir, the officer said.

At least 60 people were wounded in clashes in 10 different places in the disputed region, which remains under curfew.

Most people stayed indoors for the Islamic festival of Eid al-Adha, which fell on Tuesday, while in Srinagar, the capital of the Indian-administered Kashmir, the bustling marketplaces were deserted.

Authorities did not allow congregational Eid prayers in Kashmir’s main mosques or at Eid prayer grounds in the predominantly Muslim region, but prayers were held by people in small neighbourhood mosques.

The curfew seemed to have foiled a planned march called by separatist leaders to the Srinagar office of UN military observers, which monitors a ceasefire between India and Pakistan in the disputed region.

Thousands of people have been protesting against Indian rule in Kashmir almost daily since the killing of a popular rebel leader in a gun battle with soldiers on July 8.

Kashmir has been divided between India and Pakistan since the two gained independence from British rule in 1947. Both claim the territory in full.

Several rebel groups have for decades fought Indian soldiers – currently numbering around 500,000 deployed in the territory – demanding independence for the region or its merger with Pakistan. 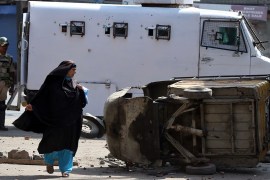