A ceasefire in Syria brokered by Russia and the United States is set to begin at sundown after a weekend of government raids killed scores of civilians, but there are concerns about whether it will hold.

The tentative truce, announced after marathon talks by the Russian and US foreign ministers last week, has cautiously re-awakened hopes of ending a five-year civil war that has killed hundreds of thousands of people and forced millions from the country.

The Free Syrian Army group, a leading rebel alliance, said it would observe it from sundown on Monday as agreed, but with major reservations.

The alliance wrote to Washington on Sunday, saying that while it would “cooperate positively” with the ceasefire, it was concerned that it would benefit the government of President Bashar al-Assad.

Another leading rebel group Ahrar al-Sham, which is seen as a “terrorist group” by Russia, rejected the deal, saying it would strengthen Assad’s government.

State news agency SANA reported on Saturday that Assad’s government had “approved the agreement” for a truce.

Lebanese Shia movement Hezbollah, which has intervened militarily in the war on behalf of Assad, announced its support.

Key Assad and Hezbollah backer Iran also welcomed the deal, though Foreign Ministry spokesman Bahram Ghasemi cautioned that its success would rely on creating “a comprehensive monitoring mechanism, in particular the control of borders in order to stop the dispatch of fresh terrorists” to Syria.

The deal does not include Jabhat Fateh al-Sham, formerly an al-Qaeda affiliate known as al-Nusra Front, and the Islamic State of Iraq and the Levant (ISIL, also known as ISIS).

Al Jazeera’s Stefanie Dekker, reporting from the Turkish city of Gaziantep, which borders Syria, said the situation highlighted the complicated web of allegiances among the country’s armed groups, many of whom are backed by foreign nations.

“Most of the countries seem to be on board, but this deal really depends on the cooperation of many different armed groups on the ground,” she said.

President Bashar al-Assad is backed by Russia’s air force, Iran’s Revolutionary Guards and Shia fighters from Iraq and Lebanon, while the rebels are supported by the US, other Western countries, Turkey and Gulf Arab states.

Assad prayed on Monday at a mosque in a Damascus suburb that was evacuated by rebels and surrendered to the government last month, state media reported, in what analysts saw as a symbolic show of strength aimed squarely at his opponents.

Assad visited Daraya, which had once been a major symbol of the uprising against him, on the occasion of Eid al-Adha, the Muslim festival.

Before the ceasefire, many people were killed in several parts of the country, particularly in government air raids, as the sides appeared to be trying to strengthen their positions before the truce came into effect.

More than 100 people were killed in a series of bombing raids, including on rebel-held parts of Aleppo province in the north of the country, and in Idlib in the northwest, Al Jazeera correspondents reported from the country.

The worst strikes were in Idlib city, the capital of the province of the same name, where they hit a market, killing 55 civilians.

Graeme Bannerman, an academic and former Middle East Analyst at the US State Department, told Al Jazeera that all sides wanted the ceasefire to work, but none were confident it would.

“It is such a tentative first step that we have to see how it evolves. The US is committed to using its influence on the people it talks to hold the ceasefire and work for a settlement and Russia is doing the same thing,” he said.

“If the argument is that Russia has stronger relationships with its allies, such as the Syrian government, that may be true. But in the end all the sides should try to work this out [to end the war].”

Several previous ceasefire agreements  crumbled within weeks . The United Nations envoy to Syria, Staffan de Mistura has estimated that more than 400,000 have been killed during the war, though that it was not an official UN figure. 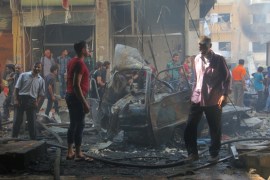 Hopes fade for peaceful Eid in Syria as over 100 killed

Bombing raids on rebel-held parts of Aleppo and Idlib come after US and Russia agree on ceasefire deal.