More than a million Muslims have gathered in the sprawling tent city of Mina for the start of the Hajj, an annual pilgrimage that re-enacts the deeds of the Prophet Muhammad from more than 1,400 years ago.

Worshippers from more than 150 countries began performing rituals at the Grand Mosque in Mecca early on Saturday, one of the holiest sites in Islam, before setting out en masse to Mina about 8km away.

The more than 1.5 million pilgrims will spend the day in Mina before setting out at dawn on Sunday to Mount Arafat, a 14.4km journey from Mina, which was the scene of the Prophet Muhammad’s final sermon.

Last year, Mina was the scene of the worst disaster in Hajj history when a stampede occurred as pilgrims made their way to the Jamarat Bridge for a stoning ritual.

Counts carried out by countries who repatriated bodies showed that more than 2,000 people may have died in the crush, although Riyadh stuck with a death toll of 769.

The disaster deepened tensions between Saudi Arabia and Iran, as many of the pilgrims killed were Iranian.

To address security concerns, pilgrims have been given electronic bracelets storing personal and medical information that will help authorities provide care and identify people; and nearly a thousand new surveillance cameras have been installed at Mecca’s Grand Mosque which will monitor crowd numbers.

Pilgrimage to Mecca is one of the five pillars of Islam and undertaking it is considered an obligation for Muslims at least once during their lives, if they can afford to do so. 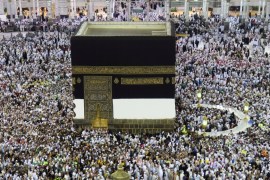 Hajj 2016: More than a million Muslims head to Mecca

About 1.5 million people from across the world are expected to perform Hajj in Saudi Arabia this year.