Israeli authorities have announced charges against a Palestinian employee of a United Nations agency, accusing the Gaza resident of providing “material assistance” to Hamas.

According to a statement released on Tuesday by the Israeli Security Agency (ISA), or Shin Bet, 38-year-old engineer Waheed Borsh was arrested on July 16 and charged in a Beersheva court on Tuesday.

The indictment accused the UN Development Programme (UNDP) staffer Borsh of abusing his position to renovate Hamas members’ homes, having been recruited by “a senior member of the Hamas terrorist organisation to redirect his work for UNDP to serve Hamas’ military interests”.

The ISA claimed that Borsh had confessed to the charges, and admitted that “other Palestinians who work for aid organisations are also working for Hamas”.

According to the ISA, the case exemplifies “how Hamas exploits the resources of international aid organisations at the expense of the civilian population of the Gaza Strip”.

Hamas spokesman Sami Abu Zuhri rejected the Israeli allegations, describing the claims as a “scheme to tighten the 10-year-old siege on the Gaza Strip” by “undermining the flow of funds for aid agencies”.

In a statement, UNDP said it was “greatly concerned” by the Israeli allegation that Borsh had “complied with a request from a senior Hamas individual to transport 300 tonnes of rubble from a UNDP rubble removal project site to a Hamas-run location at the Northern Gaza Hamas-operated port”.

UNDP added that it will be “conducting a thorough internal review of the processes and circumstances surrounding the allegation”. The organisation noted that the allegations “refer to 300 tonnes of the more than one million tonnes removed, or seven truckloads out of a total of nearly 26,000”.

According to its website, the UNDP’s operations in the Occupied Palestinian Territory are based on a mandate to “to improve the economic and social conditions of the Palestinian people by identifying their social and economic needs and by establishing concrete projects to that end”.

The news came as a lawyer acting on behalf of World Vision employee Mohammad el-Halabi told Al Jazeera that his client was tortured during his interrogation by the ISA.

Last week, Halabi was charged by the ISA with funnelling tens of millions of dollars of aid money to Al-Qassam Brigades, an accusation that the global charity has reiterated is incompatible with the NGO’s Gaza budget. Halabi was held for 50 days before being charged.

READ MORE: Why the West and Israel should talk to Hamas

In a further related development, Israeli authorities have also accused a Gaza-based employee of Save the Children of having been recruited for Al-Qassam Brigades by Halabi. Save the Children said they first learned of the allegations when contacted for comment by the media.

Analysts and human rights workers in Gaza have expressed concern that Israel may be conducting a premeditated attack on groups it has long seen as troublesome.

According to Samir Zaqout, assistant director of al-Mezan Center for Human Rights in Gaza City, “The Israeli government and [Shin Bet] are using very dirty tools in order to harass and pressure both Palestinian civil society and international NGOs.”

Almost immediately after the indictment against the UNDP employee was announced, pro-Israel pressure group UN Watch urged action at what it called “the apparently pervasive subversion in Gaza of UN and other international humanitarian aid funds by Hamas”. 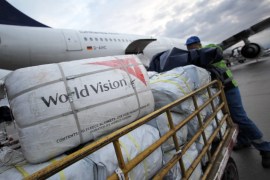 Israeli court charges Gaza representative of World Vision with siphoning off millions each year for Hamas.