UN-sponsored talks for establishing peace in Yemen have ended without a breakthrough, as fighting continues between government forces and rebels near the capital Sanaa.

The adjourning of the talks on Saturday came after Houthi fighters and the party of Ali Abdullah Saleh, the former president, rejected a UN peace plan and announced the appointment of a 10-member governing body to run Yemen.

Ismail Ould Cheikh Ahmed, the UN envoy on Yemen, announced on Saturday a month-long suspension of the talks, held in Kuwait for more than 90 days, but denied their failure.

“We will be leaving Kuwait today but the Yemeni peace talks are continuing,” Ould Cheikh Ahmed said in Kuwait City.

“We have guarantees and commitments from the two sides that they are ready to return to the negotiating table,” he said, while criticising the creation of the council by the Houthis and their allies.

“We condemn any unilateral step.”

The rebels said the plan, which had been accepted by Yemen’s internationally recognised government, did not meet their key demand for a unity government – a condition that amounts to an explicit call for President Abd-Rabbu Mansour Hadi’s removal.

The area is a key route to Sanaa, the Yemeni capital, which has been under Houthi control since 2014.

“The army and the resistance have managed to liberate a number of important military positions that had been controlled by the coup militias, most prominent of which is the Manara mount which overlooks the centre of Nehem district,” the agency quoted a military spokesman as saying.

Local sources told Al Jazeera on Sunday that intense air strikes by the Arab coalition hit Houthi gatherings and camps in Mokha, Haradh and Midi, eastern Yemen, as well as in Nehem.

Yemen descended into chaos after the 2012 removal of Saleh, whose forces are fighting alongside the Houthi fighters.

In 2015, Saudi Arabia assembled a coalition of Arab states to defeat the Houthis in Yemen.

On Saturday fighting was reported on the Yemeni-Saudi border, where a Saudi border guard was killed by fire directed from the Yemeni side, the Saudi state news agency SPA said citing a security spokesman.

A spokesman for the Arab coalition accused the Houthi fighters of escalating attacks along the border, where the coalition had scaled back its military operations to give the Yemeni peace talks a chance to succeed.

“The militias began military operations along the border after the suspension of the Yemeni consultations,” General Ahmed al-Asseri, the coalition spokesman, told the Saudi-owned Al Hadath television, referring to the Houthi fighters.

“The Houthi militias are trying to achieve gains on the ground to make up for political losses.”

As reported by Al Jazeera, internally displaced Yemenis often must cope with a lack of food and inadequate shelter.

Many Yemenis who have not fled are also suffering, especially those in need of healthcare.

As of January 2016, 2,800 civilians had been killed by the fighting in Yemen, with 8,100 casualties overall since the conflict escalated in March last year. Both sides have been accused of killing civilians. 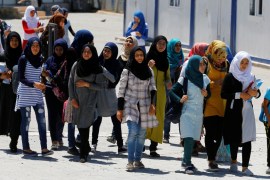