The group published what it said was the terms of the agreement on Saturday. The deal reportedly includes an end to strip searches and other types of invasive body checks that are considered “humiliating”, improving ventilation in prisons and reducing overcrowding in cells, among other issues.

Israeli authorities carried out a crackdown in prisons in recent days, which prompted Hamas, the armed movement that governs the Gaza Strip, to call for an open-ended hunger strike.

“Units from the Israeli prison authorities took a large number of Hamas-affiliated prisoners out of their cells and stripped them entirely naked; some were searched with dogs, beaten and humiliated in the prison’s shared space,” Osama Shaheen, director of the Hebron-based Palestinian Prisoners’ Center for Studies, told Al Jazeera.

The Israeli Prison Service said on Friday that it had moved Hamas prisoners, searched cells and seized mobile phones earlier in the week, acting on “intelligence information about direction of terror from inside prisons”, according to AFP news agency.

The Prison Service did not immediately respond to a request for comment.

As part of the crackdown, Israeli authorities also transferred prisoners, including the head of the Higher Commission of Hamas Prisoners, Muhammad Arman, to other prison facilities in different parts of the country.

The deal, according to prisoner groups, stipulates that all transferred prisoners, including Arman, be returned to the prisons they were originally serving time in.

“Many of these prisoners have been given life sentences. Their life is inside the prison. When you keep moving them from one place to another, you rid them of any sort of stability,” Shaheen said.

The other conditions mentioned in the deal include allowing books to be brought to the prisoners during family visits and allowing prisoners access to an additional news channel.

It is not yet known when the deal will be implemented.

Farah Bayadsi, a lawyer with the Jerusalem-based prisoner rights group, Addameer, believes the deal was a strategic move for Israel, at a time when it is facing pressure inside the prisons from different waves of hunger strikes.

“It is clear that the sudden announcement of this deal at this time was planned, with the goal of calming the situation down inside the prisons,” Bayadsi told Al Jazeera.

At least 100 other prisoners declared a mass hunger strike in support of Bilal Kayed who has embarked on his own open-ended hunger strike to protest his detention by Israel.

Kayed was placed under administrative detention – a court order that allows Israel to imprison an individual without trial or charge for renewable six-month intervals – on June 15, the day he was meant to be released after serving his full prison sentence of more than 14 years.

Israel’s health ministry issued a regulation that requires detainees on hunger strike to be hospitalised after 28 to 35 days since the start of their fast.

“The prisons cannot handle dealing with all these cases of prisoners on hunger strike. As such, this act corners the occupation and exposes its policies,” Shaheen said. 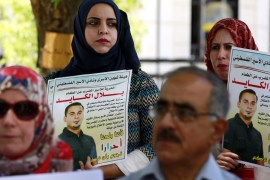 Dozens of prisoners go on hunger strike to support Bilal Kayed, a Palestinian detainee held without charge or trial. 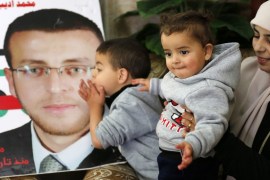