A group in Syria has reportedly demanded the release of prisoners held in Syrian and Lebanese jails in exchange for the bodies of five people who were shot down in a Russian military helicopter last week.

The Russian helicopter was downed in Syria’s rebel-held Idlib province on Sunday, killing all five people on board in the biggest officially acknowledged loss of life for Russian forces since they started operations in Syria.

A Reuters news agency report said the demand was made on Thursday in a statement signed off by a group calling itself the General Foundation for Prisoners’ Affairs.

The group said it wanted the release of prisoners held in Syrian government jails and by Hezbollah in Lebanon, but did not specify who those prisoners were or how many it wanted freed.

It also demanded an end to the siege of areas blockaded by the Syrian army and its allies, and for the delivery of significant amounts of humanitarian aid to people living in besieged areas.

The group’s statement showed what appeared to be identity cards belonging to those killed in the crash.

Franz Klintsevich, deputy chairman of the Russian Federation Council committee on defence and security, said Moscow was working on returning the bodies of the Russians.

Klintsevich told Interfax that the military can hold negotiations or “use operative capabilities”.

“They can decide and reach agreements. Give them time, they will resolve this issue. It may take a week or a month,” he said.

Russia’s defence ministry said on Monday the Mi-8 military transport helicopter had been shot down after delivering humanitarian aid to the city of Aleppo as it made its way back to Russia’s main airbase in the western province of Latakia.

No group immediately claimed responsibility for shooting down the helicopter.

The Islamic State of Iraq and the Levant group (ISIL) group is not active in the area, but there are other rebel groups there, as well as fighters backed by the US and its allies.

Russia and Syria did not make any immediate comment on the demand.

Separately, fierce ground battles are under way in Aleppo province between forces loyal to President Bashar al-Assad and rebel groups amid heavy air strikes believed to be carried out by the Syrian government or Russian warplanes targeting opposition-controlled neighbourhoods.

At least 10 civilians, including seven children, were killed early on Friday in air strikes against the rebel-held district of al-Marjeh in eastern Aleppo, according to the Syrian Observatory for Human Rights (SOHR), a UK-based monitor.

Separate air strikes, believed to have been carried out by Russian warplanes, hit two displacement camps in Aleppo on Thursday.

The SOHR said at least two children were killed and 30 other civilians were wounded near the town of Atareb in rebel-held territory.

One of the air strikes destroyed an ambulance and a number of tents were also damaged or burned.

Helicopters also bombed areas in Owejil village in the western countryside of Aleppo, which killed five people, including a woman, her son and two other children.

“The violence and misery was the outcome of the latest round in the tit-for-tat fight for Aleppo – a battle many say could decide the war,” said Al Jazeera’s Reza Sayah, reporting from Gaziantep, on the Turkish side of the Syria-Turkey border.

But government forces, backed by Russian air strikes, fought back,  regaining the territory.

According to the SOHR, at least 112 civilians, including 33 children, have been killed in Aleppo since the rebel assault began on Sunday.

The UN has recently expressed its frustration at the lack of aid entering the country.

Despite that, UN officials said they were hoping for a breakthrough in negotiations to restart peace talks.

“But, with a new opposition video showing rebel fighters preparing for another offensive in Aleppo and government forces continuing their own charge, any call for a ceasefire remains in doubt,” said Al Jazeera’s Sayah.

The Syrian conflict began as a mostly unarmed uprising against Assad in March 2011.

However, it quickly escalated into a full-blown civil war, with more than 280,000 people now estimated to have been killed in fighting between the government, the opposition and other armed groups. 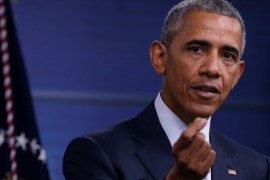 US president outlines progress in fight against ISIL but cautions that the group can still inspire small-scale attacks.

Humanitarian passages out of the northern Syrian city of Aleppo are causing controversy.