Senior United Nations officials have voiced concern over the world body’s failure to meet targets in the delivery of humanitarian aid to areas of war-ravaged Syria, though they have hope for a breakthrough in negotiations to restart peace talks.

Only 40 percent of the aid planned for areas in Syria was delivered in June and July, the head of a UN-backed humanitarian taskforce for Syria said on Thursday in Geneva.

There is “fighting in too many places, and that affects the besieged towns more than anything else,” humanitarian adviser Jan Egeland said, adding that the UN failed to reach its goal of helping 1.2 million Syrians during the two-month period.

The UN has in recent days pinned hopes on efforts by Moscow and Washington to restore a ceasefire in Syria as fighting intensifies.

“There is still time, we cannot give up hope. Bear with us and I think in next few days there might be some movement” towards holding “credible talks,” Ramzy told reporters in Geneva.

“We need to do something about Aleppo and very quickly. There is still a chance for that in the next days.”

After cutting off the last remaining rebel supply route to the eastern half of the city, government forces have reportedly begun retaking rebel-controlled parts.

Approximately 300,000 civilians are trapped inside the besieged city, according to the UN.

“We are in intensive discussions with the Russian Federation and the government of Syria to ensure that the civilian population in Aleppo is protected and that standards of international humanitarian law are respected in any operation of humanitarian assistance,” Ramzy said.

“We continue to believe that no one has an interest in further escalating the military situation in Aleppo in a way that would impede humanitarian aid and also impede chances of political settlement,” he added.

US President Barack Obama blamed the violation of ceasefires on the Syrian government with its “vicious attacks on defenseless civilians, medieval sieges against cities like Aleppo, and blocking food from reaching families that are starving”.

In Thursday’s news conference at the Pentagon, Obama also condemned Russia’s “direct involvement in these actions” and said it raises “very serious questions about their commitment to pulling the situation back from the brink”.

“So far Russia has failed to take the necessary steps. It is time for Russia to show it is serious about pursuing these objectives.”

At least 40 Syrian civilians have been reported killed since Wednesday in the besieged city, local activists told Al Jazeera.

“According to opposition activists, most of the victims were killed by air strikes and barrel bombs by Syrian government forces,” Al Jazeera’s Reza Sayah reported from Gaziantep on the Turkish border with Syria, adding that both sides in the conflict are blaming one another for the civilian casualties.

“The activists also said a refugee camp and an aid convoy were hit in those air strikes,” Sayah said.

A video shared online appeared to show what activists claimed was a destroyed aid convoy near Aleppo. It was unknown where the alleged convoy was traveling to, or who carried out the attack.

“The fighting over the past 24 hours is part of an intense back and forth fight between the Syrian government and the opposition over the past several days,” Sayah said.

The Syrian conflict began as a mostly unarmed uprising against President Bashar al-Assad in March 2011, but it quickly escalated into a full-blown civil war with more than 280,000 people now estimated to have been killed in fighting between between the government, the opposition and other armed groups. 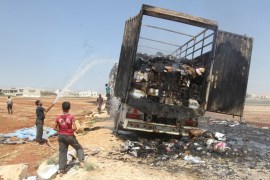 Rebels lose two hilltops and two villages as government is accused of targeting six hospitals in and around Aleppo. 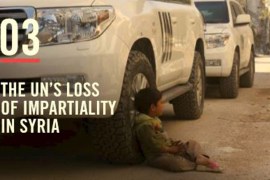 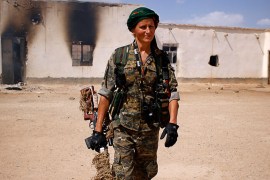