At least seven civilians have been killed and dozens of others wounded in air strikes on the suburbs of the rebel-held city of Idlib in northwestern Syria, activists say.

Tuesday’s attack, blamed on the Syrian government and Russian warplanes, struck a vegetable market in the Marret Masreen village, according to the Syrian Civil Defence, a volunteer rescue group.

“At 10am (07:00 GMT) the warplanes dropped cluster bombs on the al-Hal souq. The initial death toll is seven, mostly men, while between 30 to 35 have been injured so far, some critically,” Hatem al-Shab, head of the Syrian Civil Defence centre in Marret Masreen, told Al Jazeera.

“We are still transferring people to hospitals.”

Volunteers said the Syrian army and its Russian ally have intensified their attacks on the province in recent weeks.

On Monday, the group, also known as the White Helmets, recorded the death of six civilians, including two children, in attacks on the Abu Dhoor, Khan Shaykhoun and Marret Naaman areas in Idlib province.

“This last week, most of the villages in the Idlib province have been targeted, mainly with cluster bombs,” Ahmad Sheikho, the head of the media centre for the group, told Al Jazeera.

Idlib, the provincial capital in Syria’s northwest, has been held by opposition rebels since March 2015.

In June this year, residents faced the heaviest bombardment in months. Thousands were forced to leave the city, with activists estimating that approximately three quarters of the city’s population had fled.

“The shelling is random and indiscriminatory. Civilians have nothing to depend on, with the shelling targeting the city’s infrastructure and residential neighbourhoods,” Sheikho told Al Jazeera.

“We just want the shelling to stop. We want to stop having to pull out civilians and those that were killed from under the rubble”.

Adnan al-Ghajer, a Gazientep-based activist for the Local Coordination Committees, a Syrian network documenting daily developments in the country, said the increase in shelling was a result of the Syrian government losing ground.

“The violence increases whenever the regime is irritated at losing power in several places, specifically more recently in Aleppo and Hama.”

Syrian rebels, mainly the hardline Jund al-Aqsa, alongside the Free Syrian Army, reported in recent days that they have overrun several army and pro-government checkpoints in the northern countryside of the west-central city of Hama.

Earlier this month, rebels also managed to break a month-long government siege on the northern city of Aleppo, which has been divided by opposition control in the east and government control in the west since mid-2012. 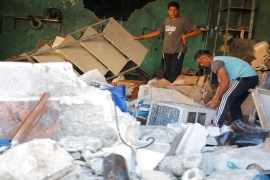 Women and children among the dead in attack on the hospital near the city of Idlib in the country’s northwest. 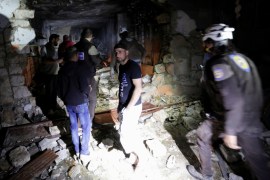