Raed Saleh, head of the Syrian Civil Defense group, told Al Jazeera that 33 civilians, including 18 women and 10 children, were brought to a local hospital after the attack in the town of Saraqeb.

“Just before midnight, helicopters dropped five explosive barrels containing cylinders of chlorine and shards of metal on neighbourhoods in Saraqeb,” he said.

“We suspect it was chlorine because of the smell and the nature of the injuries – suffocation and burning, red eyes. Members of the civil defense brought them all to the nearby hospital.”

The group, a network of volunteer search and rescue workers also known as the White Helmets that operates exclusively in rebel-held areas, posted a video on YouTube purportedly showing a number of men struggling to breathe and being given oxygen masks by rescue workers.

Two of the injured were in critical condition, Saleh said.

Saraqeb is located about 15km from where a Russian helicopter was shot down on Monday, killing all five people on board, in the biggest officially acknowledged loss of life for Russian forces since they started operations in Syria in October 2015.

The helicopter came down roughly midway between Aleppo and the Russian air force base at Khmeimim, near the Mediterranean coast.

No group has claimed responsibility for shooting down the helicopter.

“Several activists are wondering if this [the alleged chlorine gas attack] is a retaliatory attack for the downing of the helicopter,” Al Jazeera’s Mohammed Jamjoom, reporting from Gaziantep on the Turkish side of the Syria-Turkey border, said.

Yet Russia on Tuesday rejected reports that the chemical attack had happened and said it was false information.

“The Kremlin had denied that this incident took place at all,” Al Jazeera’s Rory Challands, reporting from Moscow, said.

“It said that reports of chemical barrel bombs amount to an unfounded information attack, lies essentially,” he added.

“Because the location of this alleged chemical attack is very close to the site of the helicopter downing … the Kremlin is very key to void the assumption that has been made in some circles that it is involved in some way in any kind of retaliatory or punitive response to that incident.”

The Syrian government has so far not addressed the allegations.

‘Not the first time’

Syria’s government has repeatedly been accused of dropping barrel bombs loaded with chemicals on rebel-held areas.

“In Saraqeb … this is not the first time that activists have reported barrels bombs being dropped that contain chlorine gas. We were told of an attack that happened last May, also in Saraqeb. And then, also, there was an attack … that happened just a month prior … close to Saraqeb,” Jamjoom said.

Since the conflict began in 2011, there have more than 160 chemical attacks in Syria, according to the Syrian American Medical Society (SAMS).

“The 161 documented chemical attacks have led to at least 1,491 deaths and 14,581 injuries from chemical exposure,” SAMS said in a report published in March.

Another 133 chemical attacks were reported in addition to the 161 documented in the reported, but SAMS said the claims “could not be fully substantiated”. 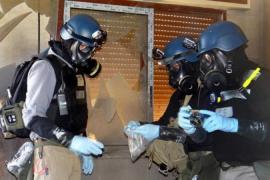 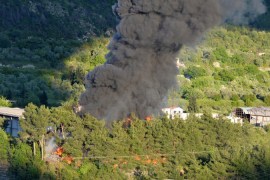 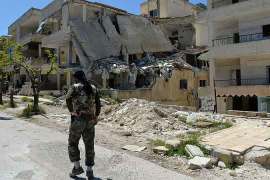 UN chief writes to Assad with new request for access as US President Obama talks tough while calling for patience.