Local elections are the barometer of the depth of democracy in South Africa. Returning to the polls on Wednesday, in the fifth local election since the dissolution of the apartheid state in 1994, the ruling African National Congress (ANC) party will find out how well it still represents the aspiration of the South African people.

Opposition parties are calling time on the ANC’s dominance of the country’s politics, but it would be foolish to rule the party out.

It’s not just that this is the party of national luminaries and revered public figures such as Chief Albert Luthuli and Nelson Mandela, to name a few, but also that, for many of the ANC’s disgruntled supporters, a credible alternative has apparently not yet emerged.

High unemployment, corruption and poor service delivery have been the main issues dominating the election campaign.

At least 26 percent of South Africans are without work. The ruling ANC government has been hit by string of corruption scandals, most notably the $20m funnelled into upgrading President Jacob Zuma’s personal home in Nkandla.

According to Municipal IQ, a data and intelligence service specialising in the monitoring and assessment of South Africa’s 283 municipalities, there were at least 70 protests against a lack of decent housing, education and other services in the first four months of the year.

Professor Steven Friedman, director of the Centre for the Study of Democracy at Rhodes University and the University of Johannesburg, says the unresponsiveness of local government is one reason driving community protests.

It is, however, not the only driver of dissent.

“Unfortunately, you cannot separate local government from the socio-economic conditions in which it operates,” Friedman said.

“The reality is that in areas in which protests occur, for example township areas, local government is very often a source of accumulating resources, either through leadership positions, or residents who are often excluded from economic benefits hope that by attaching themselves to particular politicians, they will be able to access resources.”

Discontent among ANC supporters does not, however, immediately translates into votes for the opposition.

Caught between voting for the ANC, or voting for opposition parties, Friedman said, many choose instead to boycott elections.

Turnout then, is likely to be a key indicator in how well the ruling party fares. A total of 26.3 million South Africans are registered to vote, but this certainly does not mean that so many will turn up on the day.

At the 2011 local election, 23 million people were registered, but only 11 million voted. 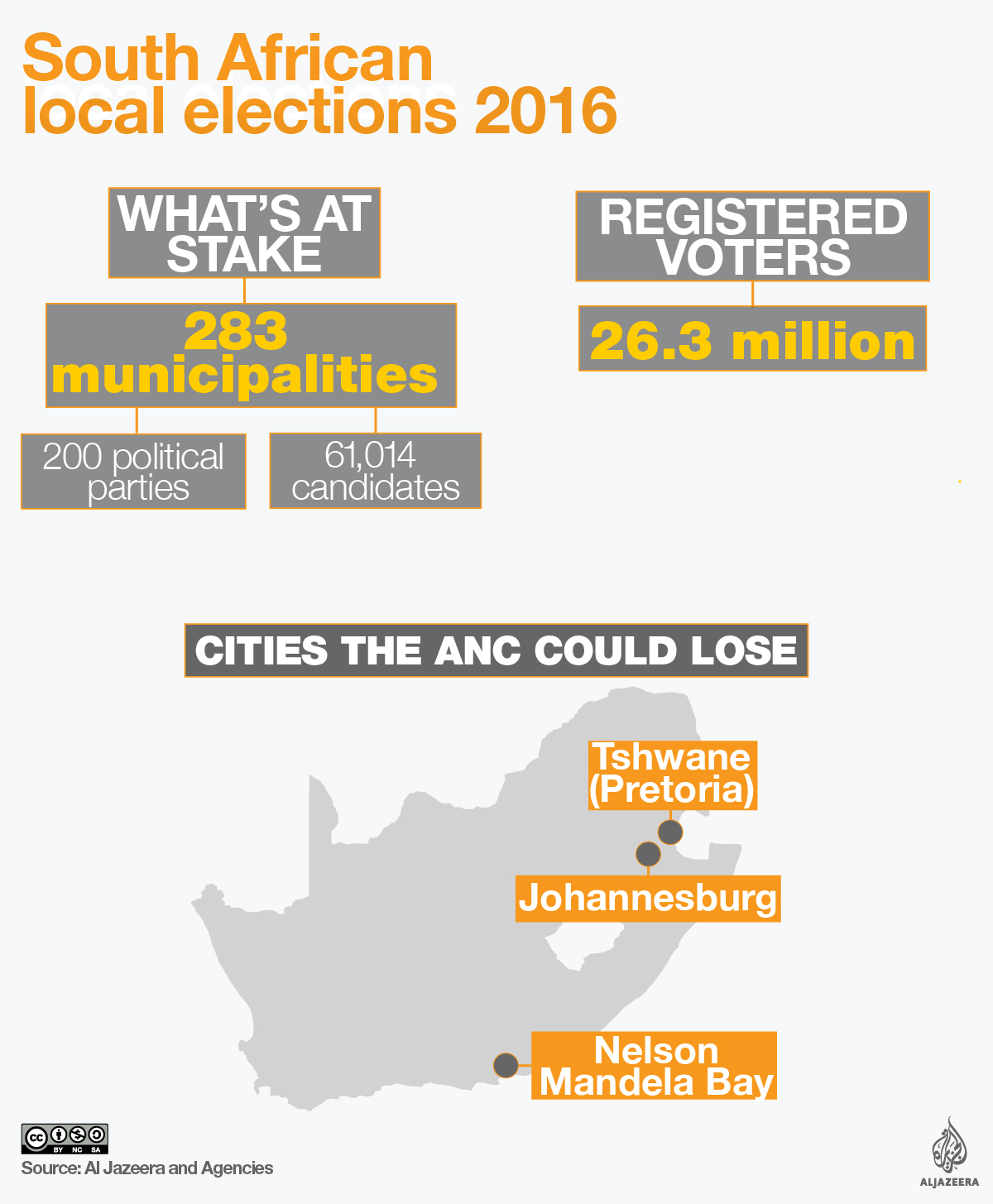 What is up for grabs?

There are some 61,014 candidates from 200 political parties (a 65 percent increase in the number of parties compared to the last election in 2011) vying for 283 municipalities.

In 2011, the ANC managed to secure control of 198 councils, winning in seven of the country’s eight biggest metropolitan areas.

Some 40 percent of the population live in those areas. In contrast, the Democratic Alliance (DA) opposition party, with Cape Town under its control, managed 18 councils.

The biggest story of the election will be the fate of Johannesburg, Tshwane (Pretoria) and the Nelson Mandela Bay.

While polling data has not been reliable historically, the most recent polls suggest that the ANC has just about done enough to retain all its metropolitan councils, albeit with much smaller majorities.

But political analyst Ebrahim Fakir says the big metropolitan areas are not the only places that will be fiercely contested.

“There is, however, a lot more up for grabs,” he says, referring to a number of municipalities in the Northern Cape and Western Cape where the margin between governing party and opposition is one, or two percent.

Should those municipalities change hands, the complexion of local government in their provinces could change significantly, Fakir said.

The focus, however, is on the big cities.

“The metros are important, because they are the engines of the economy and also home to the majority of South Africans. It’s crucial for the ANC to retain these areas, because it is the metros that must also be engines for job creation, and economic growth,” Fakir said.

The ANC is struggling with internal strife. In June, the country’s capital Pretoria was hit by violent protests over a disputed mayoral candidate for the upcoming municipal elections.

Not only has the violence manifested itself in protest over candidates, but the party has been hit by a string of alleged politically motivated murders exposing deep rooted factionalism within the party.

The situation is so dire that Police Minister Nathi Nhleko was forced to establish a task team to investigate the murders.

The minister said police were investigating up to 30 incidents of political violence, including 14 related to murder or attempted murder.

South Africans between ages 15 and 34 account for around 19.7 million (55 percent) of South Africa’s working-age population.

But unemployment rate within this category is between 35-37 percent. In 2014, it was expected that the youth vote would play an important part in deciding the national election, but youth registration and turnout was poor.

This election will be no different. According to a report published by the Institute of Security Studies (ISS) last week, young South Africans are unlikely to rush to the polls on Wednesday.

Lauren Tracy, one of the authors of the report, told Al Jazeera that young South Africans were cynical about the political establishment, and had grown increasingly wary of its ability to represent them.

“They get the challenges; they are not seeing voting as something that will change their lives,” Tracy said.

“They want to see change now, but if they don’t vote, the status quo will remain. This is why it is important they vote.”