Upsetting images have been released of a badly burned child in a rebel-held area of Syria being treated with mud for wounds allegedly sustained by a weapon similar to napalm.

The footage, released by the Homs Media Centre on Sunday, purports to show the aftermath of several air strikes on Saturday night on the besieged al-Waer neighbourhood of Homs, the country’s third largest city.

“After the bombing by war planes stopped, they began firing napalm,” a doctor in the district said. “Some of the patients were burned.”

One video shows a young boy writhing in pain as a man rubs mud on to the child’s head before removing his bandages and rubbing the thick sludge into his wounds.

Nedal, a Homs-based member of the Syrian Civil Defence, a volunteer rescue group that operates in rebel-held territory, said the man was forced to use mud as a cooling agent for the burns as there were no longer any medical supplies or materials in that part of the city.

Two children were killed and at least five others wounded by the napalm-like incendiary weapons, Nedal said.

Photos showed the charred remains of two children, identified as Hamzah, a four-year-old boy, and Ayah, a seven-month-old girl.

“We have had two child fatalities and another five children were seriously wounded by the use of napalm,” Osama Abou Zeid, the head of the Homs Media Centre, told Al Jazeera.

“At least 20 adults have also been injured by napalm,” Abou Zeid said.

Homs’ al-Waer neighbourhood has been under government siege for more than three years, with residents of the rebel-held area deprived of food and aid supplies while also being prevented from leaving due to heavy shelling and bombardment.

The local doctor said that there was a severe shortage of medical supplies available to medics with patients having to take expired medicine.

“We are using polyester bandages [for burns patients] which worsen the injuries because we don’t have any other options.”

In separate videos seen by Al Jazeera, a doctor applies cream to the entire body of a young child, while another shows a woman being escorted to hospital after having much of her clothing burned by what activists said was an incendiary device.

Incendiary weapons have caused more deaths in Syria than chemical weapons and can cause horrific burns much like those inflicted by napalm dropped from US planes during the Vietnam War.

While there is an international agreement forbidding the use of incendiary weapons in areas with a large civilian presence, it has only been signed by 113 countries.

Syria has not signed up to the agreement, known as Protocol III of the Convention of Conventional Weapons. 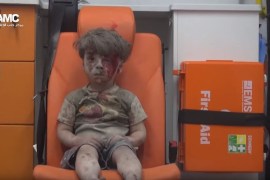 Do powerful pictures make a difference?

Haunting image of a Syrian boy injured by an air strike in Aleppo goes viral. 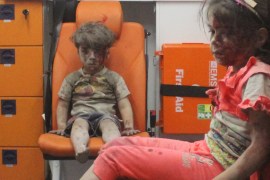 Omran Daqneesh and the limits of war photography

Why do some war images, like the one of Syrian boy Omran Daqneesh, resonate more than others? Plus, Ecuador’s media law.