At least 24 funeral mourners have been killed and 30 others wounded in a barrel bomb attack in a rebel-held area of Aleppo, according to activists, taking the death toll of civilians in the northern Syrian city in recent days to more than 60.

The Syrian civil defence, a volunteer rescue group also known as the White Helmets, told Al Jazeera that Syrian government and Russian warplanes hit on Saturday a group of people gathered in the al-Maadi neighbourhood to mourn the death of 15 women and children killed in a raid earlier this week.

“The first round of barrel bombs came down during the funeral,” said Ibrahim al-Hajj, the media centre director for the Syria civil defence.

“Those who survived headed in the direction of the shelter nearby. They were about to enter the shelter when they were hit with another round of barrel bombs, and they all dropped to the floor,” said al-Hajj.

The latest deaths bring the number of Aleppo civilians killed in raids in recent days to at least 62, activists said.

On Thursday, at least 15 women and children, all from the same family, were killed when warplanes targeted their home in Bab al-Nairab.

“They were having breakfast together when their home was hit with barrel bombs.

“There were 11 children and four women, all dead,” said al-Hajj, who accompanies the volunteers during their rescue efforts to document the details of each attack.

A civilian death toll of 23 was also recorded on Friday in Syrian and Russian air raids across Aleppo, monitoring groups said.

Government forces launched an offensive to retake the rebel-held half of the city in July 2016, imposing a month-long siege that was eventually broken by the rebels.

Since then, residents in the city say the Russia-backed Syrian government forces have intensified their bombardment and have been indiscriminately targeting civilian neighbourhoods, with hundreds of civilians being killed on a weekly basis.

Despite the breaking of the siege, activists say the government has blocked off Ramosa, one of the main exit routes for residents in the eastern half of the city.

They say the shelling has prevented many from leaving, and turned Aleppo into a besieged city again.

“The Ramosa road has been shut in the face of civilians trying to leave,” said Hamouda, adding that those who tried to escape were killed.

“Movement within Aleppo is practically non-existent”.

The United Nations estimates that up to 275,000 people in eastern Aleppo have been cut off from essential food and aid supplies for more than a month, while 1.5 million other civilians in the western parts of the city are also facing difficult access.

More than 280,000 Syrians have been killed throughout the five years of bloodshed, 4.8 million who fled the country, and 6.6 million who have become internally displaced by the violence, according to the UN. 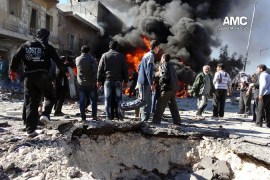 Activist group says almost 2,000 people have been killed in city of Aleppo by crude bombs dropped by government forces.