Syrian government forces have taken control of the besieged Damascus suburb of Daraya after completing the evacuation of civilians and rebel fighters from the town, according to state media.

Earlier on Saturday, at least five buses carrying fighters and their families arrived in the rebel-held city of Idlib, the Syrian Observatory for Human Rights said, following a deal reached between rebels and the government to cede control of rebel-held Daraya over to government forces.

Some 300 fighters and their families were evacuated during the first part of the operation on Friday, and activists told Al Jazeera they were expecting up to 1,000 people to leave on Saturday.

Local activists in Idlib were busy on Saturday refurbishing abandoned buildings meant to house the arriving rebel fighters and their families.

Daraya’s civilian residents, believed to number around 8,000, are expected to be sent to government-run reception centres in the capital pending resettlement elsewhere.

Al Jazeera’s Hashem Ahelbarra, reporting from Gaziantep on the Turkish side of the Syria-Turkey border, said there were concerns for those evacuated to government-held areas as there were “no guarantees they wouldn’t be detained or interrogated”.

“The Daraya deal is also being viewed as if the international community is turning its back on the Syrian people,” he added.

Rebel fighters and government forces agreed to a deal on Thursday to evacuate the suburb, which pro-government forces had surrounded since 2012. Since then, only one aid shipment had reached the area, according to the United Nations.

Residents of the suburb, which, before the war, was home to a quarter of a million people, were suffering from severe shortages and malnutrition before the aid deliveries, according to local activists.

Daraya, located just a few kilometres from President Bashar al-Assad’s Damascus palace, was one of the first places to rise up against his rule and became a symbol of the uprising.

The rebels said they were forced to agree to evacuate the town because of deteriorating humanitarian conditions.

The Syrian opposition criticised the evacuation, saying that the international community had failed the people of Daraya.

“Daraya did not fail today,” George Sabra of the opposition peace talks team, told DPA news agency. “It was the international community who failed, and failed the people of Daraya.”

“These images may seem like they represent failure and defeat to some, but the truth is, this is one form of perseverance. This shows the weakness of the regime and its allies. World powers were not able to occupy one town,” said Husam Salameh, a field commander in the Ahrar al-Sham rebel group.

By leaving Daraya, the rebels are worried that they might lose other areas on the outskirts of Damascus – places such as al-Ghouta, Madaya, Douma and Zabadani, which are all under government siege and are all considered major opposition strongholds around the capital.

According to the United Nations, nearly 600,000 people live under siege across Syria, most surrounded by government forces.

The Syrian civil war started as a largely peaceful uprising against Assad in March 2011, but quickly escalated into a full-scale war.

Earlier this year, the UN special envoy to Syria, Staffan de Mistura, estimated that at least 400,000 people had died over the past five years. 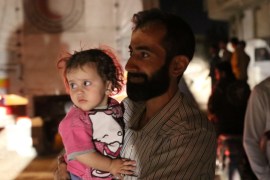 Thousands of residents and rebels to exit Daraya in deal that cedes control of besieged suburb to government forces.