A former economy minister of Brazil has testified that Dilma Rousseff, the country’s suspended president, did not break any laws justifying impeachment.

Rousseff, 68, is accused of taking illegal state loans to help bridge budget shortfalls and mask the true state of the economy during her 2014 re-election campaign.

Nelson Barbosa, the former minister, and Ricardo Lodi, a Rio State University law professor, were the final defence witnesses brought to testify on Saturday that Rousseff did not break the law or harm the economy, which is now in deep recession.

“There is nothing remotely illegal,” Barbosa said. “You cannot act retroactively with a new interpretation of the law.”

The same argument was delivered on Friday by a first batch of Rousseff witnesses who said that such budgetary manoeuvres have long been common practice and that Brazil’s economic decline was entirely unrelated.

Her accusers laid out their case on the trial’s opening day on Thursday, arguing that Rousseff was criminally irresponsible and helped run once booming Brazil into the ground.

Tension is building in advance of Monday when Rousseff, from the leftist Workers’ Party, will take the stand for the first time and face her accusers.

She will be accompanied by her mentor and predecessor in the presidency, Luiz Inacio Lula da Silva.

Lula rose from poverty to found the Workers’ Party and become one of Brazil’s most popular presidents ever before helping Rousseff take his place.

The once all-powerful pair are now demonised by the right, blamed for Brazil’s economic shambles and tainted by the revelation of a gigantic corruption scheme at state oil giant Petrobras which peaked during the Lula presidency.

Lula’s presence and Rousseff’s allegations of a plot to destroy 13 years of Workers’ Party rule will make for a highly charged atmosphere in the deeply divided Senate where a shouting match broke out on Friday, forcing the session to be suspended.

Final arguments will follow Rousseff’s testimony, then the voting session, which will include speeches by each senator, with the final result expected on Tuesday or Wednesday.

Two-thirds or 54 out of the 81 senators must vote for impeachment to force Rousseff’s immediate removal.

The latest estimates by opposition senators and major Brazilian newspapers is that the pro-impeachment side is on track to win.

The current acting president Michel Temer – Rousseff’s former vice president turned bitter enemy – would then be sworn in to occupy the post until 2018 elections.

Since he took over the temporary job with Rousseff’s suspension in May, Temer has installed a new centre-right cabinet with a market-friendly message that has won praise from investors.

Brazil’s economy shrank 3.8 percent in 2015 and is forecast to drop a further 3.3 percent this year. Inflation stands at around nine percent and unemployment at 11 percent. 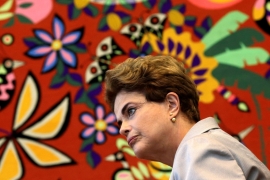 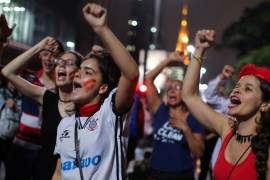 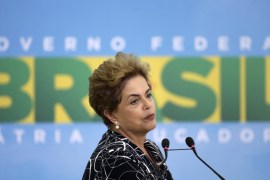