Thousands of protesters across Australia have held rallies to demand the closure of the country’s overseas refugee detention centres.

Demonstrators took to the streets of several Australian cities on Saturday, carrying banners with the words “Close the camps, Bring them here” to demand that asylum seekers and refugees from camps on Nauru and Papua New Guinea islands be resettled on the mainland.

Al Jazeera’s Andrew Thomas, reporting from Sydney, said the Australian government had agreed to close the Australian-funded prison camp for asylum seekers on Manus Island, though the fate of 800 refugees held in the camp remained unclear.

“Some have been there [in the camps] living in limbo for more than three years, the same goes for the families held on Nauru,” our correspondent said.

“Finding out what goes on in those prisons is very difficult, journalists are banned and the Australian government has brought in a law that prevents those [who] worked in them talking about what they have seen, the penalty is about  two years in prison.

“However, despite that, some former workers have sat down with me and told me about what they saw inside and why they want those prisons closed,” Thomas said.

Judith Reen, an ex-teacher on Manus Island and Nauru, said the conditions at the camps were shocking.

“It’s just so pointless that the suffering you see. It felt a lot worse than a prison, a lot worse,” she told Al Jazeera.

“When it would rain the sewerage would just rise up and you could see raw sewerage running through, it was really disgusting.”

Another former teacher in Nauru, Evan Davis, said there was no privacy and that the asylum seekers were constantly watched.

“This is not by accident, this is a deliberate attempt to break people’s spirit and the depression they are experiencing, the loss of hope, the denial for their education, the denial of their freedom, and the fact that we are stealing their childhood from them, it is torture,” Davis said.

Under Australian law, anyone intercepted while trying to reach the country by boat is sent for processing to detention centres on Manus Island off Papua New Guinea, or the Pacific island of Nauru.

Some asylum seekers have spent years in the camps, which have been criticised by the United Nations and human rights groups, with numerous reports of abuse and self-harm among detainees, including children.

Some in Papua New Guinea are unhappy at the prospect of hundreds of asylum seekers being resettled in their country, and there have been reports of refugees being attacked by locals.

Rallies are also planned in Tokyo, after allegations of widespread abuse in the camps. 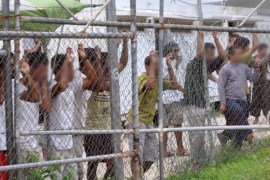 The offer comes following an announcement that one of the refugee detention facilities will be shut down.