The United States and Russia are “close” to reaching an agreement to end the war in Syria, with both nations saying they will try and finalise a deal in the coming days.

US Secretary of State John Kerry said late on Friday that talks with Russian Foreign Minister Sergei Lavrov in the Swiss city of Geneva had “achieved clarity on the path forward”, but together they offered few details on how they planned to renew a February cessation of hostilities and improve humanitarian assistance.

“We don’t want to have a deal for the sake of the deal,” Kerry said. “We want to have something done that is effective and that works for the people of Syria, that makes the region more stable and secure, and that brings us to the table here in Geneva to find a political solution.”

President Bashar al-Assad’s future was not part of the talks. Instead, discussions were focused on finding an effective and lasting solution to end the violence, which would open negotiations on a political transition in Syria.

“If the remaining details can be completed, we believe we will be able to address the two primary challenges to the cessation of hostilities – the regime violations and the increasing influence of the al-Nusra Front,” Kerry said.

Last month, the Nusra Front, one of Syria’s most powerful anti-government groups, split from al-Qaeda and rebranded itself as Jabhat Fateh al-Sham, or The Front for Liberation of al Sham.

Al Jazeera’s James Bays, reporting from Geneva, said there were still several issues that needed to be resolved.

“The talks were aimed at getting a final deal on cooperation in the fight against the Islamic State of Iraq and the Levant (ISIL, also known as ISIS) group, brokering a ceasefire for 48 hours to alleviate the suffering of the people in Aleppo, and to try and get the political process in Syria – the Geneva peace talks – back on track. They spoke for 12 hours but they failed to reach such an agreement.”

In the days ahead, technical teams comprising US and Russian military and intelligence experts will decide which opposition groups they can work with, Reuters news agency reported.

Friday’s talks came as opposition groups effectively surrendered the Damascus suburb of Daraya to the government after a gruelling four-year siege.

Kerry said the Syrian regime had “forced the surrender” of Daraya in contravention of the February cessation of hostilities agreement, but Lavrov said the local accord was an “example” that should be “replicated”.

The Russian foreign minister said another besieged area was “interested in such an operation with mediation of the Russian Federation”. He did not name the area.

WATCH: Is federalism the answer to the war in Syria?

Residents and rebels in Daraya began to leave the besieged area where civilians had been trapped since 2012 and the UN and the International Committee of the Red Cross expressed concern for their safety.

Al Jazeera’s Hashem Ahelbarra, reporting from Gaziantep near the Turkey-Syria border, said the general sentiment among the Syrian opposition is that Daraya’s evacuation was a “sad day for the opposition, and many military factions say they are going to continue the fight until Bashar al-Assad is deposed.

“Today the opposition is critical of the deal, saying the international community is silent … paving the way for the government to go ahead with systematic starvation of the people just to force the rebels out of the areas they control.”

Speaking to Al Jazeera from Jordan, Charmain Mohamed, advocacy adviser of the Norwegian Refugee Council, said the end of hostilities in Daraya was a positive step, but her team was “concerned about the protection of civilians” and that any evacuations “should be voluntary in nature”.

The Syrian opposition also criticised the evacuation, saying that the international community had failed the people of Daraya.

“Daraya did not fail today,” George Sabra of the opposition peace talks team told DPA news agency. “It was the international community who failed, and failed the people of Daraya.”

Some opposition groups called the deal a major setback as Sunnis would be forced from their homes, further fracturing the country along sectarian lines.

In 2015, there was a similar deal in Zabadani on the outskirts of the capital, Al Jazeera’s Ahelbarra said.

The Syrian civil war started as a largely peaceful uprising against President Assad in March 2011, but quickly developed into a full-scale war.

Earlier this year, the UN special envoy to Syria, Staffan de Mistura, estimated that at least 400,000 people had died over the last five years. 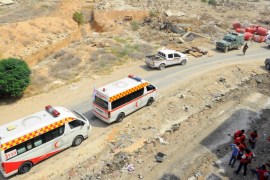 Syria: Evacuation of Daraya begins in deal to end siege