Iran has said Russia is no longer using one of its air bases to launch strikes on targets in Syria, but the US said it is unclear whether Russia’s use of the base has actually stopped.

“It was a specific, authorised mission and it’s over for now,” Bahram Ghasemi, spokesman for Iran’s foreign ministry, told reporters in Tehran on Monday.

Ghasemi left open the possibility of Russia utilising the Hamedan base in the future, saying it would depend on “the situation in the region, and according to our permission”.

Levan Dzhagaryan, Russia’s ambassador to Tehran, said that all Russian planes had left Hamedan, but  added that Russia might use the base again in the future.

“There are no reasons to worry. If the leaders of our two countries consider it necessary and reach the relevant agreements, what sort of problems can there be?” Dzhagaryan told Russia’s Interfax news agency on Monday.

“For the time being, there are no [Russians] remaining in Hamedan” airbase, he added.

Iran and Russia are key backers of Syrian President Bashar al-Assad in the Syrian civil war.

Al Jazeera’s Rory Challands, reporting from Moscow, said signs of the deal souring emerged late on Sunday when Hossein Dehghan, Iran’s defence minister, said that Russia should have kept things quieter and criticised Moscow of “showing off” in making the operation public.

Challands also said a “political split in Iranian leadership” could be the real reason behind the end of the operations.

“There were certainly voices in Tehran that were saying that this might be anti-constitutional; that Iran should never have allowed a foreign power to use its airbases.”

Later on Monday, US officials said it was not clear whether Russia had actually stopped using the base.

State Department spokesman Mark Toner reporters that Washington was closely monitoring the cooperation between Russia and Iran and that “it’s not clear … whether their (Moscow’s) use of this air base has definitively stopped”.

The flights from Iranian territory started on August 16, significantly shortening flight-times for Russian warplanes and allowing them to carry increased firepower.

Russia said it had struck targets linked to the Islamic State of Iraq and the Levant (ISIL, also known as ISIS) and the Jabhat Fateh al-Sham, previously known as the al-Nusra Front rebel group, in Aleppo, Deir Az Zor and Idlib.

Tehran oversees thousands of troops fighting for Assad on the ground, while Russia provides air power.

Activists in Syria, however, accuse Russia and Iran of aiding the Assad regime in targeting civilian neighbourhoods and infrastructure.

The two countries oppose calls for Assad to step down as a way of resolving the conflict, which began as a mostly unarmed uprising against Assad in March 2011, but quickly escalated into a full-blown civil war involving opposition groups and the regime as well as several foreign governments backing opposite sides.

Monitoring groups estimate that more than 280,000 Syrians have been killed and millions having been displaced. 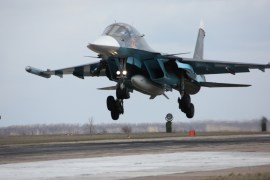 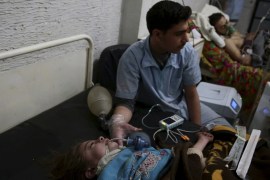