A court in Bangladesh has postponed the case of some 18 people facing trial for alleged construction code violations related to the Rana Plaza tragedy, when nearly 1,130 people lost their lives in a building collapse.

The April 2013 collapse of the Rana Plaza building housing garment factories in Dhaka ranks among the world’s worst industrial accidents. It prompted a global outcry for improved safety standards in the country’s massive garment industry.

Bangladesh is the world’s second-largest exporter of ready-made garments.

Tuesday’s scheduled court case was expected to give some of the 130 witnesses a chance to take the stand in a case where it is alleged that three extra storeys were added to the structure.

The case was postponed after the defendants appealed to the judge for a delay on the grounds that they had filed a petition challenging their charges with the high court.

“The judge complied with their request and postponed the hearing until October 26,” Chowdhury said.

The owner of the building, Mohammad Sohel Rana, and former chief engineer are in custody, but at least five of the accused are on the run.

Victims are demanding justice and they want the court to speed up the process. But whether that happens remains to be seen, Chowdhury said.

“Bangladesh does not have a good track record of bringing people to justice in any major industrial accident,” he said.

Hundreds of witnesses are scheduled to give evidence when 41 people appear on murder charges in a second trial in September.

The Rana Plaza disaster put pressure on global brands such as Gap, JC Penney and Walmart to improve conditions in Bangladesh where they have garments made.

But rights groups say not nearly enough has been done.

“In 2015, the workers get some money from the Trust fund but still the manufacturers and the government couldn’t pay them any compensation,” Nazma Akther, the president of the combined Garment Workers Federation, told Al Jazeera.

“And now most of the injured workers are severely injured and they need proper treatment and healthcare. It is very absent and nobody takes care of them.”

READ MORE: When workers die, no company can walk away

Almost three in four survivors of Rana Plaza have been unable to work owing to physical ailments and trauma.

Companies are split over how to improve conditions.

Big European firms signed an accord that would make them legally responsible for safety while US groups such as Wal-Mart Stores Inc have broken ties with non-compliant factories.

In 2013, the Bangladesh government raised the monthly minimum wage for garment workers by 77 percent to $68, and amended its labour law to boost workers’ rights, including the freedom to form trade unions. 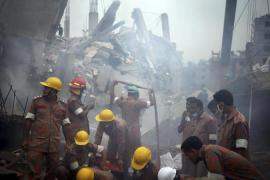 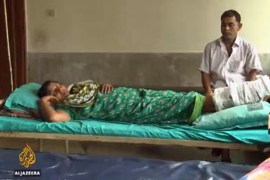