The Israeli army has carried out dozens of air and tank strikes across northern Gaza, injuring at least four Palestinians, in response to a rocket launched from the Palestinian territory into Israel.

Palestinian medical officials said on Monday that a 17-year-old youth was among those wounded in Sunday night’s air strikes.

No one has claimed responsibility for the rocket that was fired from Gaza into the southern city of Sderot. No casualties or damage were reported from the rocket strike.

“We conducted strikes against several dozen targets in the Gaza Strip,” an army spokeswoman told the AFP news agency on Monday.

Sami Abu Zuhri, a spokesman for the Hamas movement, which governs the Gaza Strip, said Israel “carries responsibility for the escalation in the Gaza Strip and this new aggression will not succeed” in weakening the movement, according to AFP.

In a Facebook post, Iyad al-Bozum, the spokesman for the interior ministry in Gaza, said that “the Israeli aggression against our [Palestinian] people targeted many facilities and caused significant damage to infrastructure in different areas of the Gaza Strip”.

There were no reports of further attacks Monday.

The Israeli strikes were also criticised by Turkey, which voted on Saturday to ratify the normalisation of its ties with Israel following a six-year rift.

“We want to clearly express that these attacks against civilians were not approved,” Turkish Prime Minister Binali Yildirim told reporters in the capital Ankara on Monday.

“The normalisation of our relations with Israel will never prevent, stop our stand for Palestinians’ justified cases and our common action with them,” added Yildirim.

The country’s foreign ministry also released a statement condemning Israel’s attacks which it said “caused injuries to innocent Palestinian civilians” and was “not acceptable regardless of their grounds”.

Emmanuel Nahshon, spokesman for Israel’s foreign ministry, responded by calling Turkey to “think twice before criticising the military actions of others”.

“The normalisation of our relations with Turkey does not mean that we will remain silent in the face of its baseless condemnations,” he said on Monday, according to the Associated Press news agency.

“Israel will continue to defend its civilians from all rocket fire on our territory, in accordance with international law and our conscience.”

Israel ended its permanent military and civilian presence in the Gaza Strip in 2005 in what it called the “Gaza disengagement”, in which all the Israeli Jewish-only settlements in the strip were dismantled and the Israeli citizens living there evicted.

However, the area remains effectively occupied as Israel retains control of its airspace, seafront and all vehicle access, blocking trade and free movement for the territory’s close to two million Palestinian residents. 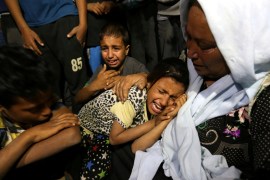 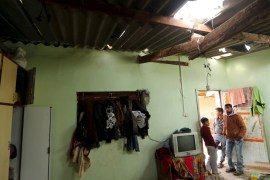