Up to 60,000 people have fled South Sudan since violence escalated over the past three weeks, the United Nations refugee agency UNHCR said.

An already shaky 2015 peace deal signed after a bloody civil war in the world’s newest nation looks uncertain as clashes rage on between troops loyal to President Salva Kiir and those allied with former rebel leader Riek Machar.

“They brought to us very disturbing reports. Armed groups operating on roads to Uganda are preventing people from fleeing,” UNHCR spokeswoman Melissa Fleming told a briefing on Tuesday.

The bulk headed to neighbouring Uganda, doubling the flow over that border over the past 10 days, and the rest to Sudan and Kenya, the agency added.

“We engaged them and they tried to put up some resistance, but at the end we overcame them and they fled to different locations,” Koang said.

Koang accused Machar’s SPLM/A (IO) party of shelling government positions in Nasir town in Upper Nile state, while the opposition claimed it was the Sudan People’s Liberation Army (SPLA) that shelled their positions.

The United States said over the weekend it had received “disturbing reports” of renewed violence in the south of the country and the United Nations is considering imposing an arms embargo. 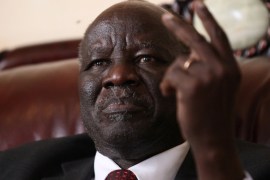