Iraqi Prime Minister Haider al-Abadi has issued a travel ban on several members of parliament accused of corruption until an investigation is completed.

On Monday, Defence Minister Khaled al-Obeidi accused Parliament Speaker Salim al-Jabouri and other politicians of lobbying for businesses seeking contracts to sell overpriced planes, vehicles and other goods to the armed forces. He said they sought to influence ministry appointments and some tried to blackmail him.

As well as the parliament speaker, Obeidi mentioned the names of four sitting MPs, one former MP and two parliamentary officials affiliated with the speaker.

They all denied the accusations and called for an investigation.

Abadi ordered a “temporary travel ban” against those accused, in order “to investigate the validity of the allegations”, a statement from the prime minister’s office said on Tuesday.

A parliament-appointed committee, which will begin its work on Wednesday, will probe the allegations, according to Talal al-Zobaie, head of the Integrity Commission.

“This matter caused an earthquake in parliament,” he told the Reuters news agency.

The scandal comes at a critical time for Iraq as its armed forces gear up to recapture the northern city of Mosul from the Islamic State of Iraq and the Levant (ISIL, also known as ISIS).

Obeidi made his announcement while appearing before parliament on Monday to respond to separate corruption allegations at his ministry.

The Iraqi defence ministry has been accused by politicians of wasting billions of dollars in public funds and weakening the armed forces to the point where they collapsed in 2014 in the face of the ISIL threat.

Abadi’s efforts to combat corruption in government have been met with resistance and caused major disruption to Iraqi politics.

Several anti-government protests demanding reforms and a fight against endemic corruption have taken place in recent months in the capital Baghdad. 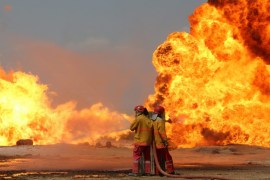 Five killed, including top police commander, as ISIL claims responsibility for one of two attacks in oil-rich region.