A 30-year-old teacher has reportedly died in custody of the Indian army in Indian-administered Kashmir, residents have said.

Shabir Ahmed Moonga was among dozens who were injured and taken away during the late-night raid by the army and police on Wednesday at Khrew village in south Kashmir’s Pulwama district, the locals said.

His body was handed over to his family early on Thursday, the villagers said, speaking on condition of anonymity because they feared reprisals.

Army spokesman Colonel Nitin N Joshi said the cause of death was being investigated, while police said Moonga was killed in a clash between the security forces and protesters.

UpFront – Reality Check: Who actually cares about the Kashmiris?

Indian-administered Kashmir has been in the grip of almost daily anti-India protests and rolling curfews sparked by the killing on July 8 of a popular rebel leader, Burhan Wani, in a gunfight with government forces.

With Moonga’s death, the death toll reached 66 in the protests.

Dr Nazir Chaudhary, medical superintendent at the main SMHS hospital in Srinagar told the AFP news agency that 24 injured villagers had been admitted for treatment.

Kashmir has been divided between India and Pakistan since their independence from British rule in 1947. Both claim the Himalayan territory in full.

Several rebel groups, including Wani’s Hizbul Mujahideen, have fought for decades 500,000 Indian troops deployed in the territory, demanding independence for the region or its merger with Pakistan. 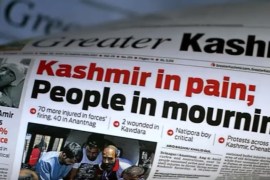