A protest is due to take place outside a school in Khan al-Ahmar, a Bedouin village on the outskirts of Jerusalem, after Israeli authorities ordered it be shut down and demolished.

The solidarity protest, organised by the Palestinian Ministry of Education, was staged after village residents and the Italian ambassador were informed in writing on Monday of Israel’s decision to shut the school, which accommodates 170 students from five Bedouin communities in the region, community spokesman Eid Abo Khamis told Al Jazeera.

Italian aid organisation Vento Di Terra helped the Jahalin Bedouin community residing in al-Khan al-Ahmar to build the school in 2009 to serve as an alternative to distant schools, the routes to which are both risky and expensive.

Shlomo Lecker, the attorney representing the Jerusalem-based Bedouin community, told Al Jazeera that the Italian ambassador had been summoned by Israeli Prime Minister Benjamin Netanyahu to discuss the matter.

“I spoke to the Italian ambassador several days ago after his meeting with Netanyahu,” Lecker told Al Jazeera, adding that the ambassador was informed that an official order was going to be issued to close the school down.

IN PICTURES: When a school is illegal

“In response to these orders, the Palestinian Ministry of Education decided to open the school a week earlier than originally planned. This might make any plans of closure more difficult to carry out.”

Starting the school year earlier than scheduled ensures that students are in regular attendance inside the premises, which makes it less likely for Israeli authorities to permanently close the school down.

According to a report released by Israeli human rights group B’Tselem, the Israeli Civil Administration, the governing body of Israel’s occupation in the West Bank, issued a demolition order one month after the school had been opened in 2009, because it was built near a road to which expansion plans had already been approved.

Nearby Israeli settlements and the Israeli NGO Regavi have petitioned the Supreme Court three times since then, demanding the demolition of the encampments in Khan al-Ahmar, which are home to some 100 families.

Khalid Quzmar, a lawyer and the general director of Defense for Children International, an organisation advocating for the rights of Palestinian children in the occupied territories, told Al Jazeera that requests for the school’s demolition and closure are “part of a wider plan to displace the Jahalin Bedouin”.

The school is “essential to the community”, Quzmar said.

“There is no justification behind closing down the school. It was built using mud and tyres to avoid breaking laws that prohibit Palestinians from using cement in construction,” he added.

The Jahalin Tribe currently lives on the periphery of Jerusalem, on the West Bank side of the Apartheid Wall. In the early 1950s, the Bedouins were displaced from their land near Tel Arad, in the southern Negev desert. The tribe is the largest refugee tribe in the West Bank today.

In 2013, the Israeli Supreme Court decided to relocate the Jahalin Bedouins to an area near the city of Jericho, where they would be under Palestinian Authority control.

Area C of the occupied West Bank accounts for more than 60 percent of the entirety of the West Bank, and is under full Israeli control. The Civil Administration regulates all Palestinian construction and building within the area.

The Israeli Civil Administration was unavailable for immediate comment when contacted by Al Jazeera. 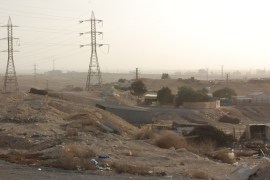 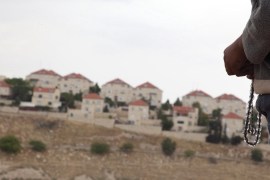