The Houthis targeted a crowd on Tuesday at an industrial area of Najran, close to the Yemeni border, Ekhbariya television channel said.

Four Saudi citizens and three expatriate workers were among the dead, it said.

An Arab military coalition, led by Saudi Arabia, has been conducting air strikes on Houthi positions in Yemen since March 2015 in support of the government of President Abd-Rabbu Mansour Hadi.

The coalition stepped up the raids this month after UN-mediated peace talks between the rebels and the internationally backed government were suspended.

On Tuesday, the coalition launched an investigation after international condemnation of an air raid that Doctors Without Borders (MSF) said killed 14 people at a hospital in Yemen.

Another 24 people were wounded in the strike that hit the hospital on Monday in Abs in the rebel-held northern province of Hajja, the Paris-based aid agency said.

An MSF staffer was among the dead, it said, naming him as Abdul Kareem al-Hakeemi.

A team from coalition “has seen the UN Secretary General’s call for an investigation” into MSF’s claim and is initiating a probe, said the group known as the Joint Incidents Assessment Team.

“This investigation will be independent and will follow international standards. The JIAT will make the results of its investigation public,” it said. 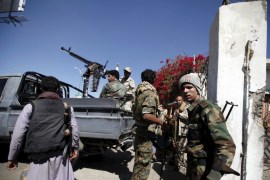