Jordan’s King Abdullah II said on Monday that he stands firmly against any Israeli attacks on al-Aqsa Mosque in occupied Jerusalem.

In an interview with the Jordanian broadcaster Ad-Dustour, the monarch promised to fight “repeated violations and attacks carried out by Israel and extremist groups” at the holy site.

Jews, who consider the compound their holiest site and call it the Temple Mount, are allowed to visit but not to pray on the esplanade in order to avoid tensions with Muslims who worship there.

On Sunday, about 400 Jews entered the compound to commemorate the destruction of two ancient temples, but several who tried to pray there were expelled by Israeli police, while seven were arrested.

Israeli police spokesman Mickey Rosenfeld told Al Jazeera that the Jewish visitors who had not abided by visitation guidelines were removed from the premises.

“There are rules for visitation. For instance, there are certain areas in the Temple Mount that Jews aren’t allowed to enter, and certain areas they are not permitted to visit,” Rosenfeld said.

“Seven Jews were removed from the premises and released afterwards for deviating from visitation guidelines.”

Police units were stationed at several locations throughout the area, he said, in order to prevent clashes from occurring between the Jewish visitors and employees of the Waqf.

“This was the first time that such a large number of Jews had visited in one day,” Sheikh Azzam al-Khatib, head of the Islamic Waqf in Jerusalem, said, adding that the majority of Palestinians who sought to pray in the mosque on Sunday were denied entry.

“The Israeli police only allowed the elders to pray, and prevented the youth and women from entering.”

Palestinian fears of Israeli intentions to undermine Muslim control of the Al-Aqsa mosque compound were a key factor in a wave of violence that erupted 10 months ago.

Palestinians argue that Israel is seeking to change the status quo at the compound, a claim that Prime Minister Benjamin Netanyahu has repeatedly denied.

Israel occupied east Jerusalem in 1967 and later annexed the territory in a move never recognised by the international community. 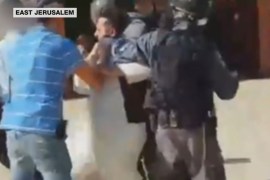 At least seven Palestinians hurt after clashing with police over visit by Jews to Muslim holy site during Ramadan. 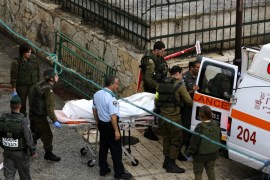 Unrest continues in West Bank after US said Israeli-Jordanian plan to install cameras inside mosque could calm tensions.