Iraqi civilians fleeing the town of Hawija have been shot at by the Islamic State of Iraq and the Levant (ISIL) group, as government forces and their allies have said they were preparing a major offensive to retake the town.

“We have been walking for 16 hours,” a displaced woman who requested anonymity told Al Jazeera.

“Everybody is suffering here. We have received nothing so far, no mattresses, no blankets, no water and no ration. We are here left unattended.”

Abandoning ISIL is punishable by death, but in the past few days there has been a heavy flow of civilians fleeing Hawija since Iraqi and Kurdish forces dropped leaflets warning of a looming offensive.

“We left because of ISIL’s trickery,” a young man who managed to flee told Al Jazeera.

“They are destroying us. We agreed to leave and cross to the other side where Iraqi forces are located. It is better for us. The rest of the people could hardly escape.”

Hawija fell to ISIL in June 2014, shortly after the armed group captured Fallujah. Analysts say recapturing the town, which is just 25km southwest of Kurdish-held Kirkuk, could cut a key supply route to its fighters.

Kirkuk province is divided between areas mainly controlled by the Kurdish autonomous region and areas held by ISIL.

The Kurdish Peshmerga fighters took control of Kirkuk in late 2014, and since then, the oil-rich region has been at the centre of a territorial dispute between the Kurds and the central government in Baghdad.

ISIL overran large areas north and west of the capital, Baghdad, in 2014, but has since lost ground to the Iraqi forces backed by the US-led air strikes and other fighters.

Since recapturing Ramadi in late December, Iraqi forces have continued to battle ISIL and retook Fallujah – the first city to fall to the group. In recent weeks the government has pushed through with an offensive to retake Mosul, Iraq’s second largest city.

Mosul, which fell to ISIL in June 2014, was once home to some two million people, but the current population has been estimated at around half that figure, with the number of those fleeing their homes increasing. 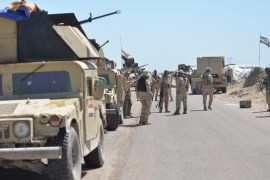