No one has claimed responsibility for the attacks, but authorities have been quick to deny any involvement by separatists waging a violent campaign in the country’s far southern provinces.

For some analysts, however, the official rejection of separatist involvement is more about protecting Thailand’s booming tourism sector, which accounts for more than a fifth of the country’s GDP, than adopting a considered approach to the investigation.

“The evidence and the rhetoric are completely disconnected,” Anders Engvall, a research fellow at the Stockholm School of Economics, told Al Jazeera.

“Even if you have Thai courts sentencing southern separatists for doing something, [the military] will still say they are not involved,” he said.

The southern region, which the country annexed more than a century ago and which borders neighbouring Malaysia, has been battered by 12 years of violence as Malay Muslim rebels seek greater autonomy in a Buddhist-majority country.

Near daily shootings and roadside bombs in the area have killed more than 6,500 people since 2004, most of them civilians.

Yet, police officials say the bombings and arson attacks that hit some of the country’s best known tourist resorts on Thursday and Friday, including Hua Hin, Phuket, Phang Nga and Surat Thani, were orchestrated by a single perpetrator.

“I can assure you that these current attacks aren’t linked to incidents that have occurred in the Deep South of Thailand,” Pongsapat Pongcharoen, a deputy national police chief, told reporters days after the attacks.

On Monday, assistant national police chief Suchart Theerasawat said that, while the bombs used in the attacks “were related and similar to those found in insurgent attacks in the Deep South”, it was too early to conclude there was any link.

A reflexive exclusion of southern separatist groups from the investigation was also motivated by efforts to contain perceptions of the deadly, yet localised, southern conflict, Engvall said.

“The Thai authorities have been very eager to avoid any type of international involvement in the conflict so they do everything possible to prevent UN or Western nations from getting involved in any way,” he said.

In 2004, tension in the so-called Deep South between the majority Malay, Muslim population and their Buddhist countrymen, erupted into bloody conflict.

Bombings, shootings and arson attacks are regular events in the three-most affected provinces of Pattani, Yala, Narathiwat, as well as parts of Songkhla province.

The violence has mostly been confined to the three provinces, and no attack outside the region of the scale and complexity of August 11-12 has ever been linked to armed groups.

Engvall, however, said a recent vote for a new military-drafted constitution, within the context of floundering peace talks with the separatists in the south, could have acted as a catalyst for more audacious attacks.

“They [the separatists] have gone on for 12 years in isolation with little success. In the first 10 days of August, they did 50 of exactly the same type of attacks in the Deep South and no one cared,” Engvall said.

“They have a motive to go outside and aim further north to achieve their political aims.”

The potential push north comes after military statements that the referendum on the constitution, which gives the army more power in how the country is governed, had passed peacefully.

WATCH: Into the south

Other Deep South watchers said similarities in the modus operandi of last week’s attacks with those of the fighters were another reason to consider separatist groups.

Of particular interest to analysts was the use of so-called “double tap” explosions, where two bombs in close proximity explode one after another to target emergency workers responding to the first – an established tactic of Deep South separatists.

Instead, officials are laying blame for the attacks on a vaguely defined network conspiring to commit “local sabotage” – phrasing which seems to focus on enemies of the military government who are likely to be aggrieved by the referendum results.

Thaksin was removed by a military coup in 2006 and his sister, Yingluck, Thailand’s first female prime minister, was removed by the Constitutional Court of Thailand in 2014. The military launched a coup soon after.

While not explicitly named, the Red Shirts have rebuffed the implicit accusations, one leader even threatening defamation lawsuits to anyone trying to link them to last week’s attacks.

Addressing the nation on Friday night, Prime Minister Prayuth Chan-ocha, the army commander who now rules Thailand, asked for patience and calm in the investigation.

He discouraged speculation about the possible identity of the attackers before speaking of “bad people” who had been taking action against his government since before the August 7 referendum.

The remarks, again, firmly placed last week’s attack in the context of domestic politics and not the southern insurgency.

Thitinan Pongsudhirak, a political scientist and director at the Institute of Security and International Studies at Chulalongkorn University in Bangkok, said there was a need to wait for more substantial evidence before making any conclusions about the tourist town attacks.

But, he conceded, that “there’s a built-in bias to put it to a domestic political problem”.

“Either way we are likely to see more violence, not less,” he said. 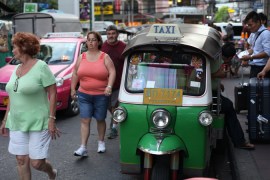 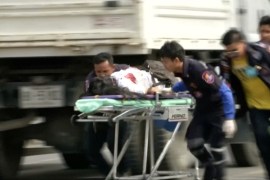