Several people, including a teenage boy, have been killed in Indian-administered Kashmir in fierce gun battles between protesters and security forces in the disputed region.

The latest bloodshed came as India celebrated its independence day on Monday.

A 16-year-old protester was shot dead late on Monday following clashes between Indian troops and protesters in Batmaloo area of the main city of Srinagar, hours after two suspected separatist fighters were also killed in a brief shoot-out a few miles away.

“The teenager was brought dead to the hospital. He was hit by a bullet,” Kaiser Ahmad, a doctor at Srinagar’s main hospital, told AFP news agency.

In a separate incident on Monday, doctors at another Srinagar hospital said a young protester had died of his wounds, days after being hit by a bullet, according to AFP.

A paramilitary police commander also died in hospital after being critically wounded earlier on Monday in an ambush in Srinagar’s Nowhatta locality.

Nine others were wounded after coming under fire during a patrol, including two local policemen who were in a critical condition, he added.

Kashmir has been divided between India and Pakistan since the end of British colonial rule in August 1947, but both claim the territory in full. Several rebel groups have been fighting Indian authorities as they seek either independence or a merger with Pakistan.

Indian Prime Minister Narendra Modi took aim at supporters of “terrorism” in his Independence Day speech on Monday, ratcheting up criticism of Pakistan while avoiding direct mention of the month-long protests in Indian-ruled Kashmir that has seen more than 50 people killed and several thousand wounded in clashes with security forces.

Pakistani President Mamnoon Hussain talked about India-administered Kashmir in a speech to mark his own country’s independence from British rule on Sunday.

In a speech at a sports stadium in Srinagar on Monday, Mufti also blamed the Indian leadership for the current crisis in Kashmir, and also appealed to protesting youths to return to their schools and colleges.

On Monday, Pakistan delivered a letter to the Indian High Commissioner Gautam Bambawale in Islamabad, inviting India for discussions to resolve the Kashmir issue “in accordance with UN Security Council resolutions”, according to a statement by Nafees Zakaria, Pakistan’s foreign ministry spokesman.

More than 50,000 people have been killed in India-administered Kashmir since fighting peaked in the late 1980s. 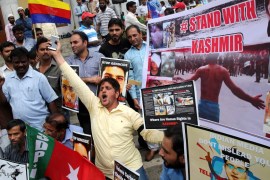