At least 10 children have been killed and about 30 injured in an air strike on a school in the stronghold of Yemen’s Houthi rebels, according to a medical aid group.

Doctors Without Borders (MSF) said on Saturday that the victims were aged between eight and 15 and attended a school in Haydan, a region in Yemen’s northwestern Saada province.

The Houthi-run Al Masirah TV broadcast what it said was the aftermath of the attack.

A video it released showed children with head, arm and leg wounds with blood-covered faces.

Mohammed Abdel-Salam, a Houthi spokesman, blamed the Arab coalition of bombarding the school.

There was no official comment from the coalition, which has been carrying out an air campaign against rebels in Yemen in support of exiled President Abd-Rabbu Mansour Hadi for nearly 15 months.

The reported attack comes a day after the UN human rights office said 272 civilians have been killed in Yemen’s conflict in four months alone this year.

Yemen has been torn apart by conflict since 2014, when Houthi rebels, allied with troops loyal to former president Ali Abdullah Saleh, captured large expanses of the country, including the capital Sanaa.

On Saturday, the Yemeni parliament convened for its first session in nearly two years in response to a call from the Houthis.

The meeting was held in the capital Sanaa despite a warning from Hadi, who is staying in Saudi Arabia.

Some 144 politicians of the 301-strong assembly attended the session in a move seen as backing the Houthis and their allies loyal to former president Ali Abdullah Saleh.

Dozens of rebel loyalists, meanwhile, gathered outside the parliament building in a show of support.

The meeting came a week after UN-sponsored peace talks between representatives of the government and rebels ended in Kuwait without a breakthrough.

Yemen has been torn apart by conflict since 2014, when Houthi rebels, allied with Saleh loyalists, captured large swaths of the country, including Sanaa.

Across the country, at least 14 million people, more than half the population, are in need of emergency food and life-saving assistance.

The 15-month conflict has also taken a horrifying toll on the country’s youth, with UNICEF warning that an estimated 320,000 children face life-threatening malnutrition. 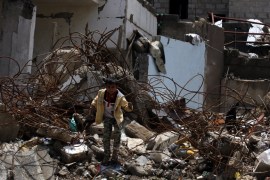 Experts concede ‘shortcomings’ in only two cases out of the eight levelled by UN and aid groups against Arab coalition.